Two years ago if you had told me that I’d be playing Texas Hold’em Poker with my Facebook friends on cell phone and enjoying it I would have snickered.  Well – that’s what I’m doing right now (actually – I just took a break from this blog post to play a hand – of course I lost all my chips on a pair of aces.)  And it is awesome.

Our portfolio company Zynga just released Live Poker on the iPhone.  Live Poker is a beautiful implementation of Texas Hold’em poker on the iPhone.  More importantly, it uses Facebook Connect to let me play Texas Holdem with all my Facebook friends (and anyone else on Facebook that happens to be playing.)  Zynga currently has over 1.4 million people playing Texas Holdem each day the free virtual casino is now enormous.

My good friend and one of our co-investors in Zynga – Fred Wilson – has a great description of how Live Poker connects the iPhone to the social web.  Mark Pincus – the CEO of Zynga – has an amazing vision of how casual games intersect with the social web and all kinds of different devices.  Mark and the gang at Zynga are doing a superb job of implementing this vision.

If you’ve got an iPhone, go give Live Poker a try – it’s free.  If you are a serious poker player and want more chips, grab the upgraded version for $9.99.

I didn’t come up with this idea – Om Malik did.  But he’s absolutely right – Obama needs to look outside the beltway for many key positions, including FCC Chair.  Tom Evslin is an absolute star in my book and as Om states:

"Tom Evslin, who is a retired telecom executive, is the kind of person I would expect to be in the FCC. He knows the machinations of the big companies and at the same time is an Internet liberal who can keep broadband providers and their anti-consumer tricks under check."

While Tom graciously responded in his post The Importance of the FCC that "[he’s] flattered although neither a likely choice (that’s an understatement) nor a candidate" help me and Om start a real drumbeat.  Obama was elected on a platform of change – let’s bring some completely fresh leadership and thinking into the mix.

As I stall before I head out the door for an hour run in the cold, dark mountains outside my house, I thought I’d share some of the interesting stuff I read this morning with you.

Forrester Chief on What Not to Cut in a Downturn: I mostly include this since it’s so entertainingly short and substance-free.  It links to a post of George Colony’s blog titled Why this tech recession will be different which is still short, has a little more substance, but seems painfully obvious.  Maybe people will cut their Forrester spending in the downtown (oh, cynical me.)  I hope no one at Forrester is using social media or any keyword alerts that catch this blog or else I’ll be in trouble with my friends at Forrester.

Where is Dubai? Jeff Jarvis has an awesome essay on his trip to Dubai.  He’s also got some pretty pictures in the post.

Five Minutes with Angel Investor Dave McClure: I’ve done a few investments with Dave and think he’s dynamite.  I went to Startup2Startup a few months ago when I was in the bay area and had a blast.  Good stuff.

Harvard: ‘Nothing Is Fucked, Dude’: Drew Faust, Harvard’s president, writes a long email on the state of Harvard given the economic downturn titled "Harvard and the economy".  In it she acknowledges the forecast that many college endowments will be down as much as 30% this year due to investment losses.  Eek.  Now’s a good time for my MIT friends to do some extra hacks on Harvard’s campus since there will be fewer security guards running around.

And now for some news from the world of companies that I’ve invested in.

How and Why We Made Glue: Alex Iskold has a long post up explaining the design choices behind the recent release of Adaptive Blue’s product.  The product – Glue – is dynamite and the explanation of the design choices is really interesting.

Solution Spotlight: Soup.io is now using Gnip: Adoption of Gnip marches on day by day.  Subscribe to the Gnip blog to see how more companies are using it.

Look Out Google Site Search, Lijit Says It’s Right On Your Heels: ReadWriteWeb analyzes Lijit’s Widget Statistics Revivial 2.0 and comes up with some interesting thoughts.  Even more interesting (at least to me) are the kind and generous words they have about Lijit’s service.  If you have a blog but don’t yet use Lijit for your blog search engine, you are missing out.

Ok – enough stalling.  Time to get dressed and go running.

Tony Stark Was In My Graduating Class at MIT

I was reading through Technology Review in the bathroom this morning and came across a quick piece on Iron Man that I missed during the movie.  Apparently Tony Stark was MIT Class of ’87.  Note the Brass Rat (not the same as the one I never wear.) 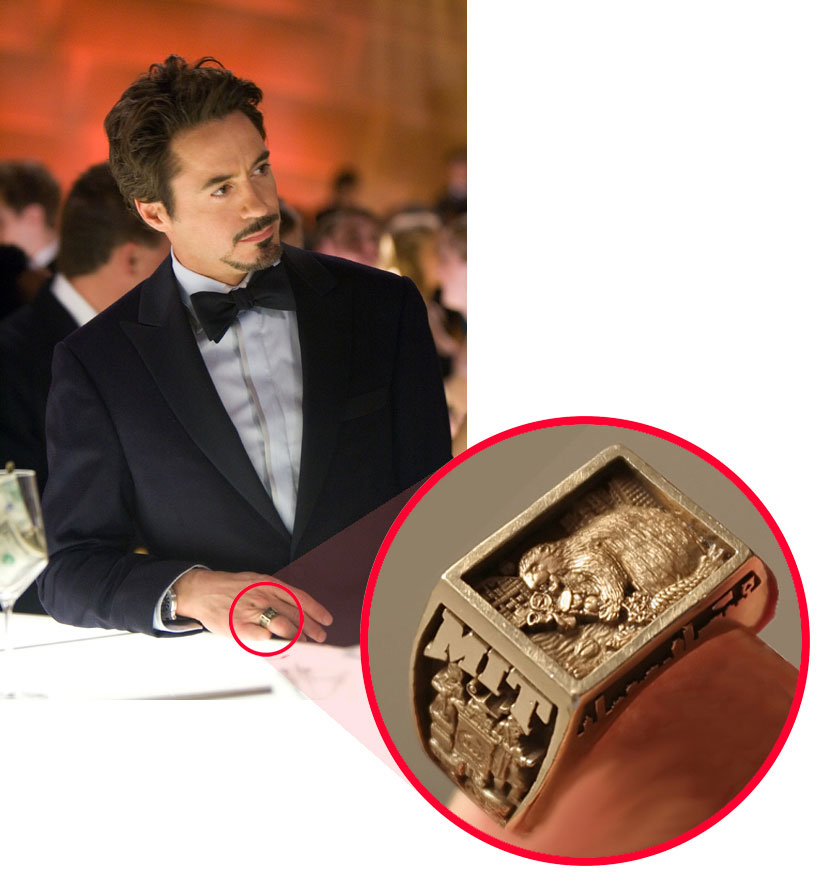 The article on the web goes on to mention my good friend John Underkoffler, who was the science and technology advisor for the movie (along with a number of other movies including Minority Report, The Hulk, and Aeon Flux.)  John is the founder / CTO of Oblong Industries, one of our Foundry Group investments.  Oblong will be unveiling itself later this month. 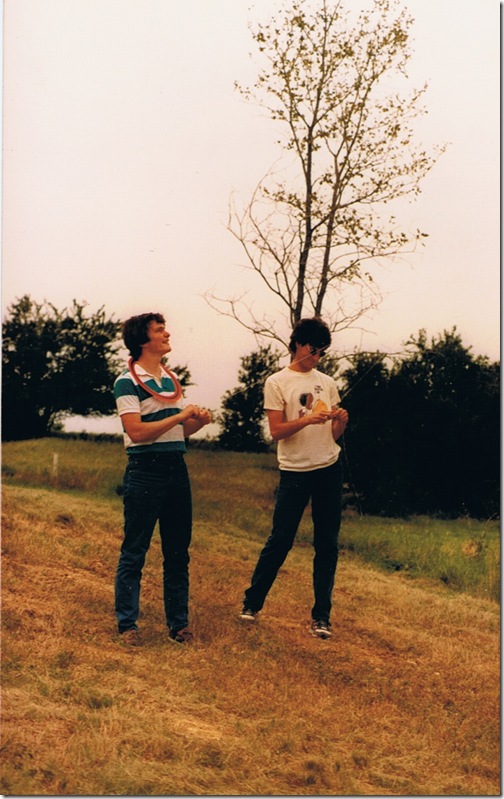 That’s me and John at my parents farm in Bells, Texas over 20 years ago.  He’s the real Tony Stark in my book.

On Wednesday, November 12th Silicon Flatirons is hosting a panel discussion titled Crash Course – Growing a Startup Amid Uncertain Economic Times.  The discussion will be held at Room 204 in the Wolf Law Building on the CU Boulder campus from 5:15pm to 6:45pm.  My partner Jason Mendelson will be speaking along with Ken Fugate of Square 1 Bank and Jim Cowgill of EKS&H.  Brad Bernthal, Brad Bernthal, Associate Clinical Professor and Silicon Flatirons’ Director of Entrepreneurship Initiatives, will be moderating.

It’s free – click here to register.  See you there.

I’ve made a large number of mistakes in my life.  My goal when I make a mistake is to understand what I did wrong, learn from it, pick myself up, and move forward.  When I’ve made the same mistake for the third time, I usually finally figure out what I’m doing wrong.

While I’ve also had plenty of success, I never get confused about where most of my lessons come from.  In case this is ever ambiguous from my writing, I learn the vast majority of my lessons from my failures.  I also have learned what I don’t know, and have figured out that I shouldn’t venture into areas where I’m clueless unless I am willing to spend a lot of time up front researching them – at least to the point where I’m no longer completely clueless.

Matt McCall points us to a great essay by James Montier from Societe General titled Mind Matters: An admission of ignorance; a humble approach to investing.  I thought it was right on and was nicely reinforced by Matt’s very personal post titled Ignorance and Humility.

On the heals of a really awesome Defrag conference, many of the companies I’m an investor in are plowing ahead aggressively regardless of the rumors and innuendo about technology entrepreneurship.  I’ve got a post in me titled "The Four Types of Companies" – look for that soon to help explain how I categorize venture-backed startups in the current environment and what I think they should be doing.  Suffice it to say, the companies in this post are all in a happy place.

I think entrepreneurship is the fundamental "reinvigorator" of our economy.  So does Mark Cuban in his post PE Obama’s 1st Big Mistake.  Cuban voted for Obama even though all of his other votes went to Republicans, Libertarians, and Independents so his criticism definitely falls in the "constructive feedback" category.

Sramana Mitra also has a great article about this in Forbes titled President Obama: Listen to Entrepreneurs.   In it, Mitra says "You want to create 5 million new green jobs–a great goal. To create 5 million jobs, you need at least 50,000 entrepreneurs–leaders–to step up to the plate."  Mitra has some great stuff in this article.

On Wednesday, the conversation shifted immediately from "the past" to "the future".  Time to get going.

I love a good data visualization.  A friend (thanks Rick) pointed me at this awesome site of different mapping permutations based on the 2008 election results.  For example – election results based on a population cartogram.

Lots more on the site – check it out.  Thanks Rick!

The amount of mailing list spam I’ve been getting has been steadily increasing with a huge jump in the last few months.  I was perplexed by it – this isn’t real spam (they are all opt-in mailing lists – many of which I recognize the associated organization.)  However, I hadn’t opted-in to any of the lists!

Some were political lists, some were technology lists, and some were random things.  As the election got closer, the political ones increased.  Today, as I was hitting delete over and over again I realized that I must have been on a seed list that got passed around between organizations.  This is a pretty typical spam thing and gets 99.999% blocked by Postini (my anti-spam system), but until recently I hadn’t connected the dots on it from legitimate opt-in emails since I actually want to get the emails I’ve opted in to.

Specifically, any mailer who understands CAN-SPAM and cares about reputation won’t share their lists this way.  At the minimum, I’d get an opt-in request from the new list which – while not great – is at least tolerable.  This phenomenon isn’t limited to the political lists – I’ve been noticing it more broadly across all the tech email lists.

In addition, it appears that I’m getting added to email lists whenever I give someone my business card.  I find this particularly annoying for all the non-profit organizations that I’m involved with.  My reaction to getting email spam from them is negative, which I presume is the exact opposite of how they want me to react.  While this practice doesn’t actually violate CAN-SPAM, it’s definitely in the category of "bad email practices" in my book.

We’ve been involved in this arena as investors for a long time with both Postini (on the email security side – now part of Google) and Return Path (on the email deliverability side).  I’m really proud of each of these companies – they’ve both created real businesses helping eliminate bad email and insure that good email gets through to the inbox.

Fred Wilson just wrote a long post on why his firm – Union Square Ventures – recently invested in Return Path.  After thinking about my mailing list spam issue, I think we are going to have another major iteration of spam dynamics that we’ll have to address and Return Path continues to be extremely well positioned to do it.

BTW – do you want to Simplify The Season with Dell Small Business?  Unsubscribe.  Delete.

Wake Up. Be Optimistic. Lead.

Fred states clearly the six things he thinks we’ll get from an Obama administration.

I won’t repeat the details of each here – go read Fred’s post.  But – I’ll add one thing.  If you are an entrepreneur, an executive in a company, or in any leadership position at any level, these same six principles apply to you.  As Fred so clearly stated, "Like everyone else, I am dying for a leader we can believe in and get in line behind and follow."  Reflect on that statement as you go about your day.