On Monday, I’ll be interviewing Tim Enwall, the founder, president, and COO of Tendril Networks as part of the Silicon Flatirons Entrepreneurs Unplugged series.  The event will be from 6:15pm to 7:15pm at the ATLAS Building at CU Boulder.  As a special bonus, you can use my bathroom on the second floor (if you are a guy).

I’ve known Tim for many years and he’s another fantastic Boulder entrepreneur.  I met him shortly after he had sold one of his previous companies – Solista – to Gartner Group.  We’ve become good friends since and have done a handful of things together, including getting completely creamed at a monthly poker game we were regulars at (ok – I got creamed, Tim usually held his own and often came out on top.)

Tim and the Tendril team have created a a fast growing Boulder company that crosses over nicely between software and cleantech.  In addition to their Colorado-based investors (Vista Ventures and Appian Ventures), Tendril has raised a substantial amount of capital from VC investors outside of Colorado, including RRE Ventures (NY-based) and VantagePoint (CA-based) as well as strategic partners such as GE Energy and Good Energies.  So, we’ll have a wide range of topics to cover, including bootstrapping a business and then selling it as well as systematically building a business using VC and strategic financing that has the potential to be the undisputed market leader with regard to the smart grid.

Come join us for the last Entrepreneurs Unplugged event of 2009.

What I Read On My Q409 Vacation

Amy and I just had an awesome week (mostly) off the grid at the Rosewood Mayakoba for my 44th birthday.  Lots of sleeping, running, massages, eating, consensual activities between two adults, and reading.  Lots of reading. 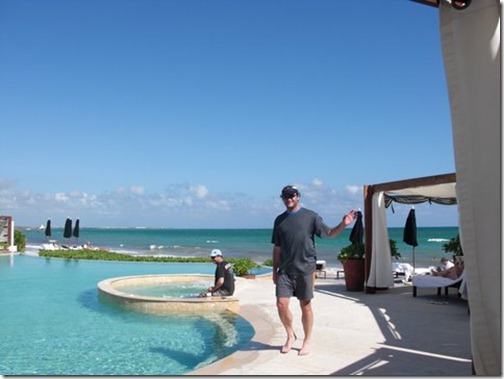 : I started the trip off with some light mental floss to get in the swing of things.  Some of my favorite Stuart Woods characters, including Holly Barker and Teddy Fay kept me entertained for a few hours.

: I’ve been fascinated by robots since I read Asimov’s I, Robot

as a small child.  In fact, I just realized I haven’t read it in 20+ years so it’s now magically on my reading robot (my Kindle) after two clicks of the mouse.  Charles Stross consistently blows my mind and Saturn’s Children delivers.  One shouldn’t underestimate how difficult it is to write the first person account of a sexbot in a world where humans (who the sexbots were created for) are extinct.  Oh, and it turns out that this particular sexbot is also an assassin, but doesn’t yet realize it.  As the book unfolds, the hierarchy of society that has been created by the robots is fascinating and Stross’ projections of the future are eerily believable.  It’s a long, steady romp through a bunch of classical science fiction ideas portrayed on a different backdrop.  Yummy.

Beginning Ruby on Rails (Wrox Beginning Guides): I have some strange fantasy about learning to program in Ruby on Rails.  I can’t quite figure it out, but I keep buying books about it.  In this case I read the first third and then skimmed the rest as this was a pretty crummy intro book.  My programming repertoire ends around 1989 as I’m proficient in BASIC, Pascal, Scheme, and DataFlex with some proficiency with CLU, Clarion, FoxPro, Paradox, and Access / VBA.  And then I stopped programming as I had too many other things to do in my first company.  I missed object oriented programming completely and find the level of complexity to do simple things in today’s languages completely baffling.  At some point Amy turned to me, asked me what I was reading, and then mocked me by referring to me as “Nerd Boy” for the rest of the day.  That was the point at which I started skimming.

: I felt like some mental floss after being called Nerd Boy so I read the latest Robert Parker book about Spenser as a child.  It’s a kids book – aimed at diversifying Parker’s audience – and I thought he nailed it.  Even though I just turned 44, I easily slip back into my 14 year old boy persona and it was easy to love this book.

: I can’t remember who recommended The Numerati

but several people did.  I was disappointed.  I knew a few of the stories in depth already and Baker’s description of them exaggerated reality.  He made his points reasonably effectively, but since I knew the backstory it was tough to swallow the way he described a few of them.

Strokes of Genius: Federer, Nadal, and the Greatest Match Ever Played

: Wertheim writes almost as brilliantly as Federer and Nadal play tennis.  This was the story of the 2008 Wimbledon final and if you are a tennis fan, you must read this book.  ‘Nuff said.

: When I read Breakpoint

I decided that Richard A. Clark had a long and successful career as a cyberthriller writer in front of him.  After reading The Scorpion’s Gate

, I realized I should have read it first since he does a great job of growing his characters (making him a broader writer than I’d expected).  While I don’t have a strong opinion on his government service track record, he’s certainly been around the block and has great depth in his storytelling.  Oh – and he makes his point beautifully with his story that we just have no clue how deep the rabbit hole in the middle east actually goes.  Great book and especially timely given our re-invasion of Afghanistan.

: I can’t remember who recommended this one to me, but I really enjoyed it even though I only understood about 50% of it.  Peter Woit is a physicist at Columbia University who is highly critical of String Theory, writes a superb blog titled Not Even Wrong, and has a gift for explaining the very complex in a way that humans (albeit smart humans) can understand.  Physics was the only science that really captivated me in high school (although I loved my Biology teacher – I just didn’t love Biology) and I had Physics on my brain when I went to MIT.  This lasted about three weeks – my bubble burst when I got a 20 on my first 8.01 (freshman physics) test.  I don’t remember what class average was, but it was much higher than 20, so I’d solidly failed the test.  I went in my room and cried for about thirty minutes, decided physics wasn’t it for me, but got it together and did ok in the class.  Every now and then I read about physics history and am entranced (same with the history of mathematics).  While the vast majority of the string theory went over my head, the book was a joy to read as I like to fantasize about being a theoretical physicist (or mathematician) in a parallel universe.

As we flew home, I started reading a book about Zombies which Niel Robertson recommended to me – I’m halfway through and it’s incredible and deserves it’s own blog post which you’ll get separately.  Oh – and it’s not really about Zombies – it’s about humanity.  And zombies.