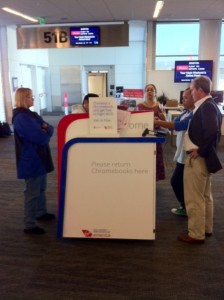 I travel a lot. I’m not a particularly high maintenance traveller as I can sleep from wheels up to wheels down on most flights. When I fly west to east I usually fly at night; east to west I usually fly early in the morning (much to the chagrin of my partners who don’t enjoy getting up at 4:15am to go to the airport quite as much as I do.)

I’m running a marathon on Sunday in Newport, Rhode Island and decided I didn’t want to take a redeye from San Francisco to Boston three days before the marathon. As a result, I’m flying “all day” – leaving SFO at 9am and getting in to Boston around 6pm.

I often fly Virgin America from SFO or LAX to BOS or NY. It’s unambiguously the most comfortable cross country flight and I always feel a little hipper when I’m chilling out in a plane in white seats with purple mood lights. But that’s just the feel good bonus. Here’s how this morning is playing out.

I show up at Virgin and notice that they have a Chromebook kiosk. Neat – there’s a bunch of computers that are connected that anyone can use while waiting for the flight. Then I realize they are giving away free Chromebooks to use on the flight. You only get to use them during the flight, but they are free and include a free WiFi connection. Double neat. Then I sit down, open up my MacBook, and immediately see my Skype WiFi app pop up and tell me I can connect to WiFi for $0.10 / minute. Since I don’t have a Boingo subscription, and there’s not any other obvious free WiFi right here, I just click yes. Oh – and there’s a nice desk area and power.

I have a five hour flight where I expect to get a solid four hours or so of online time. A decade ago, even though everyone was talking about “wireless networking on airplanes”, it didn’t really work. Today, I’m online without much effort for as much time as I want.

Virgin makes this experience seamless. When I think about my United trips, I just cringe. No WiFi on the plane, generally crummy gate setups with no power, and a very predictable “sorry – we have a maintenance problem that we are looking into.” It’s actually kind of enjoyable to be spending the day on Virgin America flying across the country.

That Was The Best Tuna I’ve Ever Had

I had a really fun night in Montreal at the opening dinner for the C100 Conference that I’m speaking at tomorrow. The dinner was put on by Accelerate MTL and included some friends as well as a bunch of new people I met tonight.

Dinner was really well done. I sat next to Howard Lindzon who teased and entertained me all night long. Dinner was a pre-set menu so I ordered the non-meat choices and didn’t think twice about it.

I’ve been a vegetarian since I was 19. I eat fish, so I guess I’m a fishetarian or pescatarian or whatever you want to call me, but no beef, chicken, or pork. Once a year I end up accidentally eating some meat (usually on nachos, soup, or something Italian) and I always realize it around 3 am.

The first course was yellowfin sashmi, which was excellent. The second course was some kind of red tuna like thing which I dug into without a second thought. It was easily the best tuna I’ve ever had. Snarf – and gone. I then made fun of my tablemates who were eating a beet salad (which also looked really good.)

Brad: “You guys made the wrong choice – this tuna tartare was awesome.”

Howard: “No seriously, look at the menu, you just ate a plate full of stake tartare.”

I looked. In fact, they’d served me “Tartare de boeuf epice, truffe, parmesan, citron.” Yes – it was the best tuna I’ve ever had because it was in fact steak tartare. And it was awesome.

Much mockery of me ensued. It’s not quite 3 am, but my stomach is doing the once a year “you just ate meat” rumble.