I just invested 90 minutes in watching The last public lecture of Randy Pausch.  Randy is a CMU professor who has done pioneering work in Human Computer Interaction, was a co-creator of Alice, co-founded CMU’s Entertainment Technology Center and – after watching his last lecture – is one of those amazingly inspiring and centered humans who understands what is important in life.

Other than knowing about Alice and occasionally stumbling across Randy’s work and research as I study HCI, I haven’t given Randy much thought.  A friend send me a link to the lecture and said that it was a “must watch” lecture.  As I started to watch it, I learned the backstory (from Randy – who is 47) that he had terminal pancreatic cancer and had about three to six months left of good health.  That context made the lecture even more remarkable. 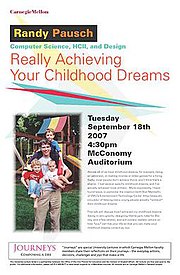 Ostensibly the lecture was about “Really Achieving Your Childhood Dreams.”  However, Randy often referred to the notion of “head fakes” throughout the lecture.  At the end, he revealed the first of his two head fakes – which is that the lecture is really about “How To Lead Your Life.”  To hear the other head fake, you need to watch the lecture.

About 20 of the 90 minutes was consumed by the intro and conclusion from other folks, but even this was worth it – both in the set up of the lecture and the recognition of the amazing work that Randy has done and the impact he has had on so many people.