I spent the weekend in Duluth, Minnesota with Amy knocking off Marathon #11 in my quest to run a marathon in all 50 states.  #11 was Grandma’s Marathon, consistently one of the best regarded marathons in the US.

After a couple of frustrating marathons, including a steadily escalating personal worst, I put some effort into training for Grandma’s.  My goal was modest – break 5 hours.  Since my PR is currently 4:05, this felt achievable. 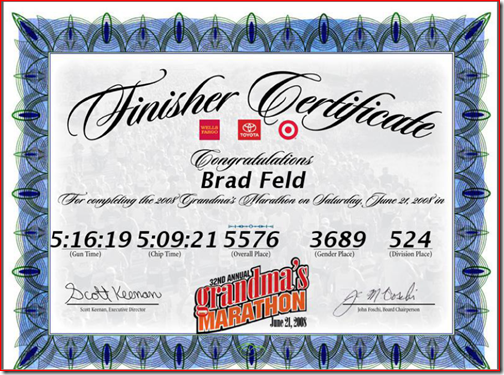 While I didn’t beat my time goal, I’m pleased with the result.  Finishing is always my key goal (I’ve finished every marathon I’ve entered – no DNF’s yet.)  While 5:00 would have been nice, the course was tougher than advertised (it’s known as a flat course; I’d describe it is "a mild undulating hill for most of 26 miles.")  It was also on the warm side – this eventually took its toll on me.

I saw Amy cheering me on just as I crossed the finish line.  I was completely used up so I was a little confused about where to find her since they shunted the marathoner finishers off in a direction away from the crowd.  I stumbled around for a few minutes until I luckily ran into her.  I was claustrophobic and a little freaked out feeling so I missed the finisher food and water as I rapidly (as rapidly as I could manage) headed out away from the crowd.  We’d covered about 200 yards when my left calf cramped up and I went down hard on the ground.  Amy was great – worried – but patient with me as she worked out the knots.  Someone passing by gave me a Coke which helped a little; we were in front of a Subway so Amy went in and got some more Coke and some potato chips while I laid on my face on the sidewalk.  While I was lying there, the other calf started cramping, resulting in me thrashing around like a hooked fish as people wandered by.  A few stopped to help, which was nice, although fortunately none of them knew how to perform a leg amputation which was what I imagine I was crying out for. 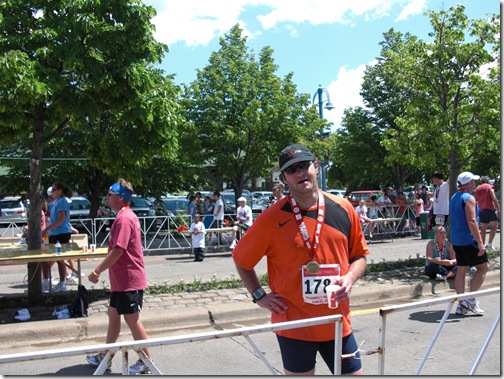 We eventually made it back to the hotel (a 10 minute walk took us about an hour) after which I slept the rest of the afternoon.  Mexican food for dinner, a very chilled out day today (e.g. lots more napping), and Indian food for dinner tonight has me mostly back to normal, albeit with two very sore calves.  Once again, Sherpa Amy was phenomenal to have along.

My big (yet obvious) lesson is that I just haven’t been doing enough long runs.  I consistently do 14 to 16 mile training runs, but I’m not doing enough 20+ training runs.  My next marathon is the Mesa Falls Marathon in Ashton, Idaho on August 23rd – I plan to do at least three runs of 20+ between now and then.  I’m ready to set my goal for Ashton, ID at 4:45 – if it has been a little cooler, I’d held back a little more in the first half, and had done a couple of 20 mile runs, I’m confident I would have been under 5 hours yesterday.

We’ve had fun in Duluth – it’s a cute little town at the very west end of Lake Superior.  Grandma’s Marathon is apparently the biggest event of the year in Duluth; by Sunday evening there was nothing going on in downtown on Superior Street.  We did – however – manage to find a good Indian restaurant. 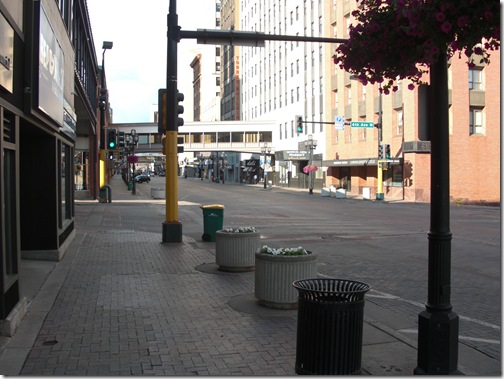