Amy and I woke up at 5am this morning (which was still several hours after dawn here in Homer, AK) to head the big city of Soldotna, Alaska (population 4,087) to run the 2008 Soldotna Rotary Unity 10 Mile Race.  As part of my marathon training I’ve decided to run a lot more races between 10k and a half marathon to try to build up my "racing brain" while having some extra fun wherever I happen to be in the world.

Soldotna is about 75 miles from Homer.  I snoozed while Amy drove.  She woke me once to inform me that there was a moose on the side of the road and asked if I wanted to stop and take a picture.  Since I’m afraid of horses, and a moose looks like three horses stapled together to me, I declined and went back to sleep.  We got to Soldotna High School (home of the Soldotna Stars) and met up with the other 100 or so people involved in the race. 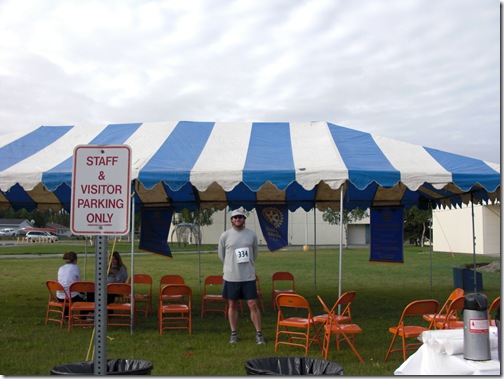 About 50 of us hopped on a yellow school bus and drove to the bustling metropolis of Kenai, Alaska (population 7,464) and stopped at the Kenai High School (home of Kardinals).  Ten minutes later the 50 of us lined up at the starting line painted on the ground in the school parking lot and took off on our race back to Soldotna.

Since I’m targeting a 4:45 marathon in Ashton, Idaho next month, I decided to do the first half in 55 minutes (11 minute miles) and then see what I had in me, being happy with anything under 1:50.  I had a hard time holding myself back – my first mile was in 9:16 and my second mile was in 9:48.  I think at this point I was near the back of the very small pack.  I managed to settle down and did the next three miles around 10:30 and then realized that I was probably in last place.  I felt great so I kicked it into gear. 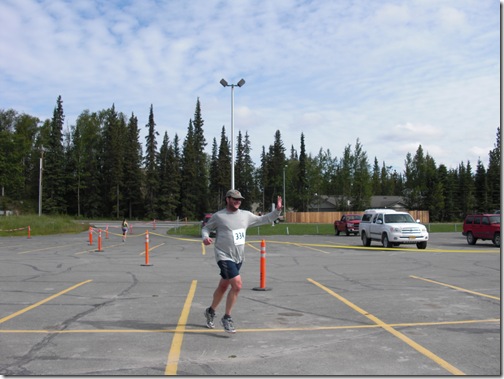 For the full data, take a look at what my trusty Garmin 305 recorded (yes – I have a 405 – it arrived yesterday – but I didn’t want to tempt the new device monster by trying a virgin 405 on my race.)  We grabbed some lunch at Froso’s in Soldotna, Amy drove home (and I napped), and then I took a shower and napped some more.  I feel great – we’ll see how I’m doing at mile 10 of my 13 mile run tomorrow.