My Bathroom Gets Papered In Forbes

A month or so ago I got a voicemail from William Barrett at Forbes.  His message was something like “call me back – I want to talk to you about your bathroom.”  Now, I never view a phone call from one of the major business magazines as a good time.  I don’t have a publicist so most of the calls are about something negative – which is fine – but rarely something I’m looking for.

Barrett’s message intrigued me so I called him back.  We proceeded to have a hilarious conversation about my CU Bathroom gift along with a variety of other topics concerning charitable contributions.  I got off the phone thinking – if nothing else – this article will be funny.  The resulting article Cash Strapped Charities Put Donors’ Names On Just About Everything is everything you’d expect it to be.

But – it gets better.  On the call Barrett said he might want a picture of me in front of the bathroom.  I said “sure” expecting never to hear about it again.  A few days later I got a call to schedule a photo shoot at CU.  Here’s the result. 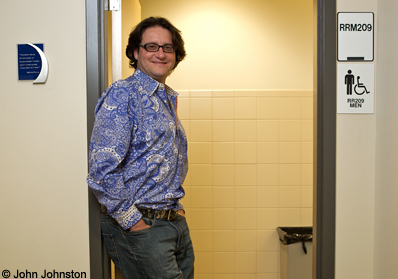 That’s my plaque on the left.  I haven’t seen the physical copy of the magazine yet (I’ve only seen it online) so I don’t know if the photo made the magazine, but if it did I now get to say that “the first time my picture was in Forbes was while I was standing in a bathroom.”