My Field Trip To The Supreme Court

I had an incredible experience yesterday.  My friend Phil Weiser, who is now the Deputy Assistant Attorney General at the US Department of Justice, Antitrust Division (I prefer to call him America’s Top Cop on Agriculture) invited me, my partner Jason Mendelson, and my wife Amy Batchelor to attend the Supreme Court Oral Arguments for re Bilski.  A rare tie sighting ensued as a jacket and tie is required to attend. 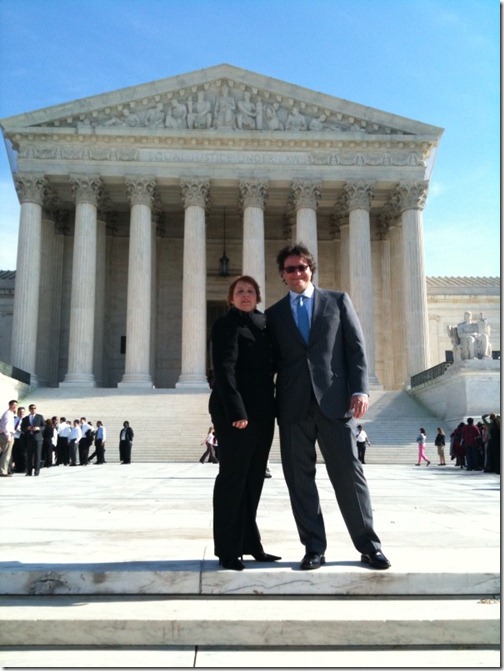 For those that know about my fervent anti-patent bias with regards to software, Bilski is an important case.  Depending on how the Supreme Court rules, it could open the door for both the invalidation of business method patents as well as begin a serious discussion about the validity of software patents.  One can hope.  So, this wasn’t a random Supreme Court visit, but rather one that is highly relevant to something I’ve spent a lot of time thinking, talking, and writing about.

As you walk up the steps to the Supreme Court, you can’t help but stop and stare.  It was a beautiful day and we just soaked up the sunshine for a few minutes.  We then walked to the side entrance, went through security, and proceeded to the Supreme Court Cafeteria where we met Phil for lunch.  We were all a little nervous which was evident as we struggled to get salads from the salad bar (how hard is it to get lunch?) before sitting down in the relatively small cafeteria. 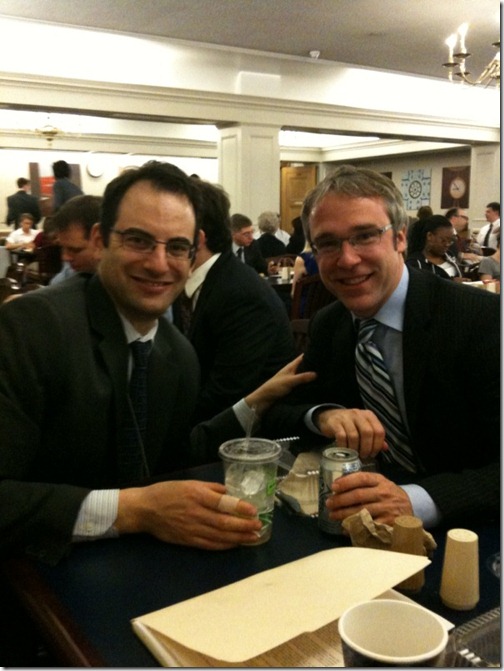 The Oral Arguments were from 1pm to 2pm so at 12:30 we mobilized.  The process of getting into the Courtroom is tedious, but surprisingly chaotic as they check IDs and accompany people in waves.  But once in, it’s powerful. We sat down and waited quietly.  The courtroom was full.  At exactly 1pm, the Justices entered.  They sat, and immediately called the Petitioner (J. Michael Jakes).  Jakes got about thirty seconds into his oral argument when Justice Scalia jumped in with a question.  A short attempt at an answer by Jakes followed by a question by Breyer.  Another short answer and then a question by Ginsburg.  Then Breyer. Then Sotomayor.  Within five minutes I was stunned at the high level of understanding the Justices had in this particular case, the insightfulness of their questions, and their level of participation.

Breyer, Roberts, Scalia, and Sotomayor continued to question the petitioner for the next five minutes.  Their tone was aggressive – bordering on hostile – but never quite crossing the line.  Jakes kept his cool although he didn’t have strong responses to much of anything (at least from my perspective).  While I was biased against the Petitioner and could have heard what I wanted to hear, it sounded to me like the Justices were leaning strongly against business method patents and trying to understand how they could possibly be valid.

The Petitioner abruptly finished (reserving the balance of his time) and the Respondent (Malcolm L. Stewart) began.  It was a similar drill – the Petitioner got started and Justice Alito jumped in with a question.  A short answer followed by Sotomayor.  This continued for about 30 minutes.  Several times the idea of software came up.  Stewart steered the conversation away from this each time or – in some cases – refused to address the question.  This was frustrating to me as I thought the Justices were throwing him fat pitches to link software in with business methods as things that shouldn’t be patent eligible.  At some point it became clear that Stewart had a clear charge to keep software out of it as he went so far as to say that the government had argued against having the Supreme Court hear this case as there were difficult problems in software innovation that hadn’t yet been worked through.  Near the end, the State Street Bank case came up (not surprisingly) although in my opinion Stewart really fumbled his response.

At the end, the Petitioner got a four minute rebuttal.  At 1:55 Chief Justice Roberts promptly stated “Thank you, Counsel.  The case is submitted.”  The justices then rose and left the courtroom.  A minute later everyone else left.

We quickly said our goodbyes to Phil (he had to get back to work), wandered around for a few minutes looking for our car, and then headed to Ronald Reagan Washington National Airport to head back to Colorado.

When we landed, the transcript of the Oral Argument was up. And John Schwartz, the NY Times reporter who we stood behind in the security line (he’s got a cool black skull wallet), had his article up titled Justices Hear Patent Case on Protecting the Abstract. The web is an amazing thing.

In short, the experience was awesome.  I’m rarely speechless but as I walked out of the Supreme Court afterwards I realized I had nothing to say.