Last year I did an obsessive experiment.  Every morning, as one of the tabs in my browser (then Firefox, now Chrome) during my daily information routine, I opened up a clever application called Daytum.  In it, I tracked four things: the number of miles I ran, the number of books I read, the number of segments I flew on which airline, and where I slept.  Following is the summary and some commentary. 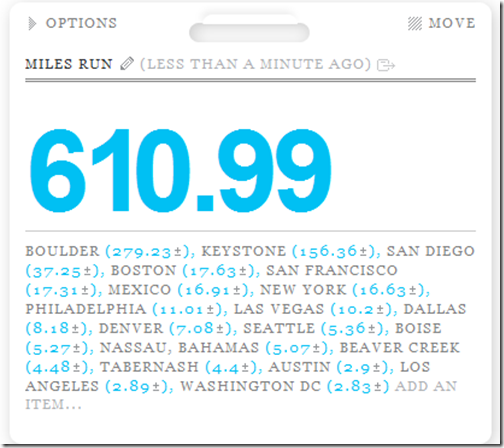 I had a disappointing running year.  I usually cover over 1,000 miles / year.  I lost about four months this year to either injuries (silly ones) or a cold (I had a multi-month bacterial infection that took a while to figure out and nail.)  Also, I didn’t run any marathons which, while a bummer, was something I expected would happen sometime on my question for 50 marathons by the time I’m 50 years old.  So – 2009 will be known henceforth as “the lost year for Feld Running.”  My goal in 2010 is six marathons and 1500 miles.  And I’ll be tracking it obsessively with other software. 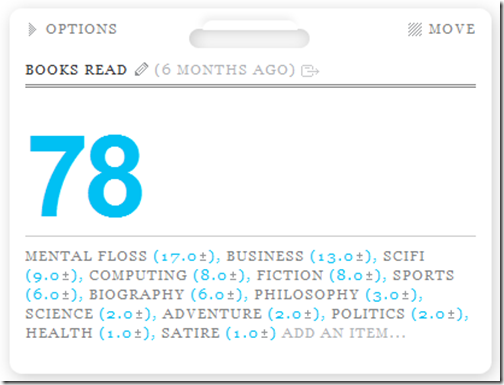 I typically read one or two books a week so 78 seems about the amount for a typical year.  I always find the categories interesting – I read less SciFi this year than normal (I’d expect it to be on par with Mental Floss).  The business books read are higher because I’m getting so many in the mail as “pre-release” or “review” copies so I’m trying to at least read some of them.  No different goals for 2010 – just “read what’s in front of me that looks interesting from my infinite pile of books.” 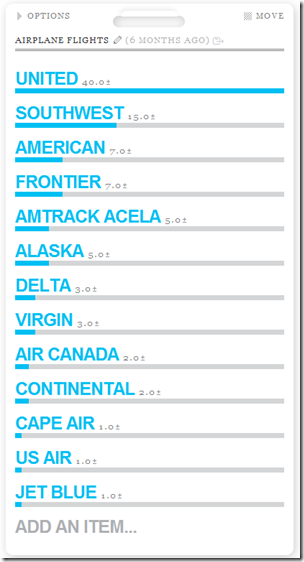 Airplane travel in 2009 was totally fubared.  I eventually decided to try to stop flying United and shift as much travel as I could to Southwest.  I expect the ratios to be very different in 2010.  I also took way too many short trips in 2009 and have decided to completely change my travel rhythm in 2010.  Specifically, I’m only going to travel every other week – my goal in 2010 is to spend every other week in Boulder.  Now, I know there will be exceptions, but I’ve already scheduled out my weeks in Boulder for the year so all I have to do now is be disciplined about scheduling.

I was fascinated to see the distribution of “where I slept in 2009.”  I expected Eldorado Springs (my main house) to be at the top, but I also expected Keystone (my mountain house) to be ahead of Boulder (my city condo).  The business travel is as expected – San Francisco, Boston, New York, Seattle, and LA.  Vacations and weeks off the grid were San Diego (tennis), Mexico and Nassau (beach), and Santa Fe.  The balance are short trips for specific things.  The one think that I will not do in 2010 is “30,000 Feet” – I’m completely done with redeyes.  And – no Alaska in 2009 – I expect I’ll spend 31 days there in 2010.

In 2010, I’m going to track an entirely different set of data – namely, all of my health and fitness data as part of my exploration around the idea of “human instrumentation.”  I’m currently using a Zeo, Withings Scale, BodyMedia BodyBug, a Fitbit, and a Garmin 305.  Look for more on this soon.  And – if you make a device that tracks anything about the human being, drop me a line – I’m interested in talking to you.