Are We Already Working For The Computers?

After spending the last seven hours in front of my computer, a phrase came to mind that my brother Daniel recently said to me in response to reading The Singularity Is Near: When Humans Transcend Biology.  Daniel said:

“What if we we are already working for the computers?”

While The Matrix and Horton Hears a Who! come immediately to mind, his comment was subtler than that.  What if we turn the entire paradigm on its side?  In our biological realm we “evolve”; in our computing realm we “innovate.”  What if the computers are actually evolving and have figured out that the best way for them to evolve more quickly is to convince us to “innovate” for them.

I had to stop and scrunch my eyes together after typing that paragraph.  The first draft I wrote was way weirder and more out there – basically a rant about how computers were having a conversation in a parallel universe that we don’t actually understand and, as part of this, had figured out how to manipulate human beings.

At Ted yesterday, my long time friend John Underkoffler, the co-founder of Oblong stated “Technology is capable of expressing generosity. And we need to demand that.” 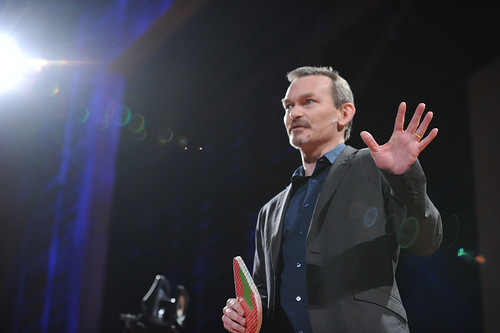 While he meant something totally different, I think this is consistent with the parallel universe I’m pondering.  As humans (at least most Americans), we regularly envision ourselves at the top of the pyramid of existence, unless you are not an atheist, in which case god factors in somewhere on your hierarchy.  But – let’s leave god (or the lack of god) out and think about “humans as a species” vs. “computers as a species”.  I started with constructs like collective consciousness and communication hierarchy and was able to quickly come up with a straightforward analogy for each one between the human species and the computer species.

And yet, I still type.  All in the name of sharing and contributing my thoughts via this very interesting mechanism.  I’m going to run for three hours this afternoon.  I’ll have my Garmin 305 on my wrist (with its GPS) and my iPhone in my pack (listening to the end of Zen and the Art of Motorcycle Maintenance.  I’ll be contributing a lot of data to both devices, which will then record them and upload them to “the computer”.  The amount of data I’m generating is enormous; I’m not quite sure what the computers are using all of this data for, but what if it was actually something specific?

Before you discard these thoughts as the ravings of a lunatic, just think about them for a minute.  This is a common construct in so much contemporary science fiction.  Maybe the “collective compute infrastructure” of the world has already passed us by and now have us working for them / it.  Wouldn’t that be something to discover 100 years from now.