When I Decided Not To Become A Doctor

My folks stayed at my condo in Boulder the last few nights with me so I was inspired this morning to write a quick post in the Letters to my Dad series that I’m writing with my father (he’s calling his posts “Father and Son.”)

In my dad’s last post, Father and Son #3, he wrote about our overthrow of the administrative regime in my high school at the start of my senior year when they botched the AP course schedule because of a “computer glitch.”  He calls it a “lesson in leadership and self reliance” and tells a great story of how we (him and I) quickly mobilized about 60 parents and students in 24 hours to get together, proposed a solution to the problem, presented the case the superintendent and principal, and then fixed the problem.  We all got to take more than one AP class (even though school was over for me my senior year at lunch time since there were no other classes to take) and I even wore a tux to prom. 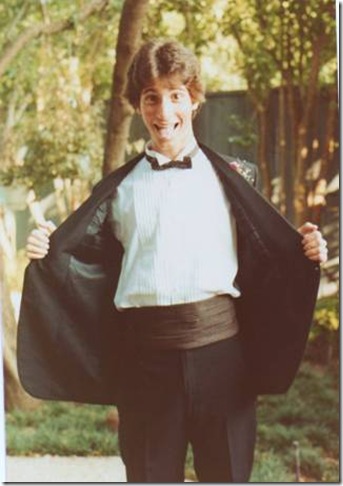 But that’s not today’s story.  When I was young, my dad regularly took me on rounds with him at the local hospitals.  He was the most experienced endocrinologist in Dallas (and one of the first doctors to specialize in clinical endocrinology) so he was in high demand.  He was also extremely respected by his peers, loved by his patients, and adored by the nurses and hospital staff.  Looking back, I like to say that he was the doctor that we all dream of having – engaging, funny, 100% focused on you and in the moment, extremely responsive, and extraordinarily competent.

I loved going on rounds with my dad.  I’d bring a book, sit at the nurses station, and read while he saw patients.  Occasionally the nurses would let me look through charts (this was well before HIPAA) or play around with the medical equipment (in the 1970’s there were a lot of beeping noises and flashing lights – perfect for an eight year old.)  Hospitals were big places which seemed huge to me at the time.

However, there were two things I didn’t like.  I hated the way hospitals smelled and was always afraid of touching things.  I didn’t realize what this was at the time, but looking back on it I realize it was an early instantiation of OCD which I’ve struggled with throughout my life.  I’m sure the linkage between the environment and the events in the hospital (sick people, dying people) reinforced something around this at a deep psychological level.

More obviously, I disliked a lot of the doctors.  I thought my dad was amazing and loved listening to the nurses talk about “Dr. Feld” when they thought I couldn’t hear them.  I’d have my head buried in a book in the corner and they’d be chatting about how amazing (where amazing is a proxy for a wide variety of great attributes) he was.  In the mean time, they’d bitch about virtually every other doctor.  I learned the word “asshole” at a relatively early age as that was the most common descriptor I remembered.  Most of the other doctors were assholes – they were arrogant to the nurses, short with patients, and many of them seemed genuinely uninterested in what they were doing.  Now – a few of them were like my dad, but only about 10%.  The rest turned me off.

When I was about 10, I grabbed a thin green book on endocrinology off of my dad’s shelf in his study.  I discovered a lot of books in his study over the years (including Atlas Shrugged and Zen and the Art of Motorcycle Maintenance).  The endocrinology book wasn’t titled “Endocrinology for Dummies” but it could have been – it was an introduction to endocrinology presumably aimed at a first year medical student.  By 10 I was devouring ever book I could get my hands on so I’m sure I laid down on a couch in our house and started reading.  The only thing I remember is how unbelievably bored I was by the book.  I’m sure it was way over my head, but this wasn’t a unique experience for me – even when I didn’t really understand very much of what I was reading I usually sucked it down anyway and went back and tried again at a later time.  I remember finishing this book and thinking something like “I never want to read about endocrinology ever again.”

My dad tried to be home for dinner every night.  He’d often head back to the hospital after dinner to go do more rounds.  At dinner we’d go around the table and talk about our day.  We alternated who went first – there was no rhyme or reason to the order that I could tell although my parents might have had a secret sequence that I didn’t know about.  A few days after I put the book back on the shelf, I went first.  I was really nervous so I just blurted out what was on my mind “I don’t want to be a doctor!”  It probably came out more as a plea or a shout, but I remember it sounding like a scream in my head.

Once I had said it, I felt so much better.  I’d been carrying around the thought for a few days terrified of what my parents would say.  All of my relatives were already asking the typical jewish “is he going to be a doctor when he grows up” question every time they saw me with my parents.  I hadn’t realized how much this was weighing on me – now it was out in the open.

I remember a short moment of quiet followed by my father quickly saying “you can be anything you want to be.”  We then spent most of dinner talking about this and when dinner was over I had a bunch of different possible careers in front of me to explore.  None of them were being a doctor.  And – I felt great because I’d learned that a huge lesson that day – that I could be anything I wanted to be.