After reflecting over the past few weeks on Turning 45 as well as Death and Dying, I’ve reached a conclusion that I’ve said out loud several times: “My life is most likely more than half over.”  The singularity not withstanding, the chances, at least today, that I’ll live to be over 90 aren’t great.

Over the weekend, I saw two blog posts from friends – one from Joanne Wilson about her mom passing away titled Judy Solomon, Entrepreneur and one from Ken Smith (I’m actually close to Ken’s brother Keith, the CEO of BigDoor) titled A Eulogy for Elmer Smith.  Both are beautifully written – Judy was 73 and Elmer was 97.  Joanne starts off with a very insightful statement:

“Old enough to have lived a full life yet young enough to have had her life cut short.  I always thought she would live to the ripe old age of 90 something, but life doesn’t always turn out as expected. “

Several of you recommended that I read Younger Next Year: Live Strong, Fit, and Sexy – Until You’re 80 and Beyond.  It was one of the books I read during my week off the grid the first week of December and I enjoyed it a lot.

It had two key graphs in it.  The first is the normal “human being decay cycle.”  Basically, at the age of 45, most humans start a long, slow, gradual decay ending in death. 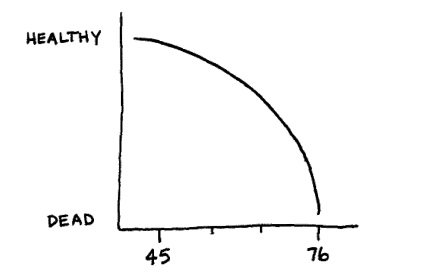 The second is the “desired decay cycle.” 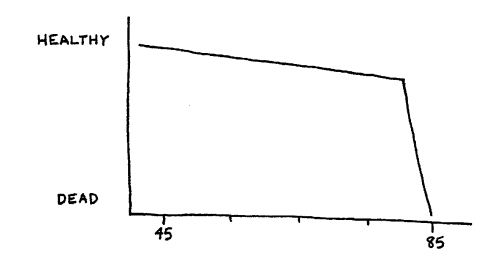 The book talks about how to live your life from 45 forward so you experience the second curve.  As Amy likes to say, there are usually only a few things you need to do to accomplish physical health (e.g. if you want to lose weight, (1) eat less and (2) exercise more.)  In this case, it’s (1) don’t eat crap and (2) exercise six days a week, at least two of them with weights.

There’s a lot more in the book, including plenty of real medical, health, and physiology explanations from Dr, Harry Lodge (the co-author).  But just internalizing these graphs along with the two tips from the book have enabled me to re-commit to the six-day a week exercise approach (at least two of them with weights).

I sure do like the second graph a lot better than the first graph.