I’m back home in Boulder about to head out for a long run in the mountains. As I was catching up on email from last week (not quite done yet) I was reflecting on the awesome week I had in New York. I had a couple of board meetings, spent a bunch of time at TechStars, gave some talks, had a pair of really fun late night dinners, had two strong runs (including one amazing one) along the east river, and stayed up until 1am drinking scotch with my partner Seth one night who was also in New York for a few days this week.

On Thursday night I gave a talk at NYU Startup Week. I followed Nate Westheimer, who runs the incredibly vibrant NY Tech Meetup. Nate led off by asserting that NY was the best place in the world to start a company and hypothesized that in the past year I had probably spent more time in NY than in the bay area. Since I track where I sleep every night (and have since 1/1/09), I was able to quickly answer this question going back 29 months.

And the winner is – New York – by seven days. 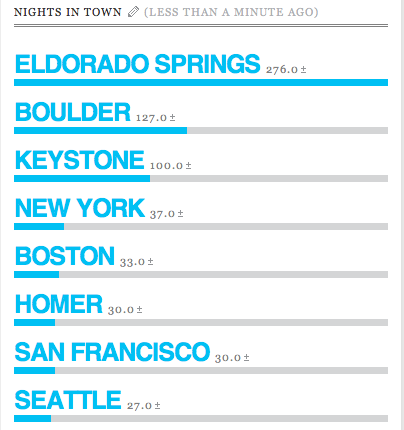 In the endless “where is the best place to start a company” argument, I think many of the ones on this list (Boulder, New York, Boston, San Francisco, and Seattle) are amazing places to create a company. They all have different strengths and weaknesses but reinforce my belief that many cities in the US can build long term durable entrepreneurial communities.