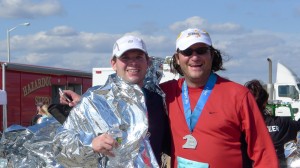 Marathon #19 in the “run a marathon in each of the 50 states” is done. I completed #19 in Newport, Rhode Island yesterday. The course was beautiful, the day was perfect, the volunteers were great, and my performance sucked. I finished in 5:13:36 – not my worst marathon, but no where near the 4:45:00 I was hoping for.

While my running base is great, I made three mistakes. I flew across the country from San Francisco to Boston on Thursday and sat hunched over my computer the entire flight. When I woke up Friday morning my upper back and neck were killing me. They settled down by Sunday morning when I woke up, but I was physically tense. Next, while I ate right on Friday and Saturday, I don’t think I ate enough. When I woke up Sunday morning I was hungry – never a great sign before a marathon. I had a normal breakfast (about 500 calories), but I only ate about an hour before the run so I don’t feel like it got stored up properly. Finally, the course only had water the first eight miles and then only every other mile – gatorade didn’t appear until mile 8. I ended up dehydrated and underfueled.

The race looped back to the starting line for the finish of the half marathon. I saw Amy at 13.1 miles and she jogged with me a little. Even though I went through the half at 2:24, I knew I was in trouble. When Amy asked how I was doing, I said something like “I’ve got nothing in my legs – it’s going to be a long 13 miles.” Fortunately, I’ve been there before and know that I can run 13 miles when I’ve got nothing in the tank, so I just soldiered on.

My friend Warren Katz finished his first marathon (at age 47) and his wife Ilana cranked out a PR for a half in 2:00. It was a huge marathon weekend – my partner Ryan McIntyre ran Amsterdam with Lindel Eakman (one of our investors – his first marathon) and my partner Jason Mendelson did the Amsterdam half marathon (his first, after having major hip surgery a year and a half ago). As a bonus, Ryan’s wife Katherine ran the San Francisco Nike Women’s Marathon. Way to go gang!

On Sunday I’m going to run the St. Louis Rock and Roll Marathon with my friend Matt Shobe (now at BigDoor; was one of the co-founders of FeedBurner). Matt paced me through the Huntsville, AL several years ago and is a great marathon partner. This is the first time I’m doing a marathon on back to back weekends. While I’m crisscrossing the country again this week (New York today and tomorrow, then San Francisco Wednesday through Friday before heading to St. Louis), I feel pretty good “the day after.” I’m in a mild state of disbelief that I’m going to do this again in six days, but I’m looking forward to seeing how it feels.

Once again my sherpa Amy was amazing. She’s got an awesome blog post up with some beautiful pictures of Newport and the marathon.