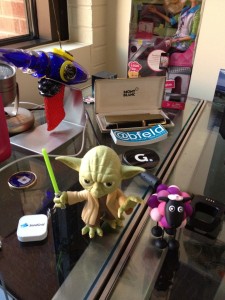 A week ago, Fred Wilson wrote a post titled Etsy Gift Finder. In it he described a new Etsy feature that uses your Facebook friends info to suggest gifts for your friends. He picked out what he called “a clay Farmville sheep thingy” and bought it for me. As you can see it has already made friends with Yoda but appears a little scared of my ray gun.

It arrived today with a nice order slip #41270774 (I love order slip numbers and trying to figure out the algorithm for them). It’s cool and a great example of “social shopping.”

Thanks Fred. I’ll definitely use the Etsy Gift Finder for some of my random gifts since I don’t believe in holidays, but just send people gifts whenever I feel like it. And thanks to ElvenStarClayworks for making the clay Farmville sheep thingy!