I’ve been obsessively tracking data about myself since 2009. The most visible data I track is on Daytum which includes Miles Run (by location), Books Read (by type), Airplane Flights (by carrier), and Nights In Town (by city). I also track all of my running data (most recently on RunKeeper and SmashRun) and all of my health data (including what I eat) on Fitbit. I track plenty of other stuff, but those are the public / systematic things.

Running: I had a great running year – probably the best in a long time. I ran six marathons, including four in eight weeks, and the last one of the year was the fastest since 2003 in 4:28:46. Overall, I covered 1,125.91 miles (not including the 6.5 miles I’m going to run today). 339 were in Boulder; next best was a monster month in Tuscany of 156.97 miles. I crossed 100 in Keystone and had another strong month in Paris at 94.65 miles. You can tell that I had two weeks of vacation in Tucson this year, plenty of short runs in cities I traveled to for work (SF, NY, Seattle), and then a bunch of marathons. 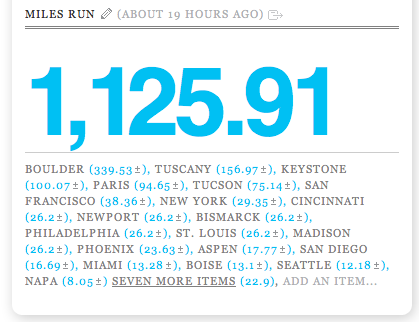 Sleep: I clearly missed a few days since I only have 354 days reported for this year. I often get asked how often I travel vs. sleep at home. Eldorado Springs is where I call home so I was there 99 nights. Boulder, which is a condo I have down the block from my office logged 40 nights. So – for the year, I was in Boulder for 139 of 354 nights, or 39% of the time. Keystone was very light this year – we were only there 25 nights (and 14 of them were the past two weeks). You can see my month in Tuscany in August and month in Paris in July, two weeks of vacation plus a little in Tucson (I guess I like Tucson), 16 nights in New York, 10 nights in San Francisco, and 10 nights in Seattle. I was only in Boston five nights this year – that will change in 2012 as I’m spending the second half of January there. While I swore off red eyes several years ago, I still ended up doing three of them this year. And if you are curious about the other 16 places, they are Los Angeles, Newport, San Antonio, Napa, Boise, Ann Arbor, Bismarck, San Diego, Orlando, Kansas City, New Orleans, Washington DC, Montreal, Portland, and Colorado Springs. 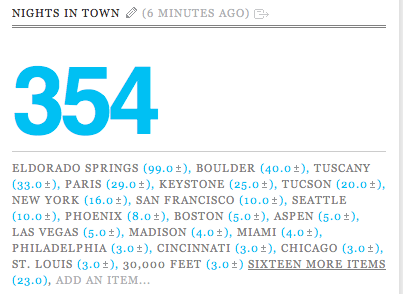 Reading: I didn’t read that much this year – only 41 books. In contrast in 2010 I read 52 books and in 2009 I read 78. Business, Biography, and Mental Floss were all even at 7 and then Philosophy, Fiction, and Sports at 4 each. I’ll definitely read more in 2012 and as you’ve probably noticed I’ll continuing blogging my reviews. 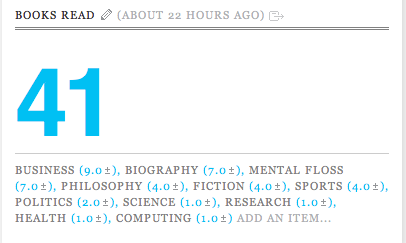 When I reflect on 2011, I had a great year on many fronts, both personal and professional. I’m looking forward to 2012 and am doubling down on my personal commitment to myself to focus on things that matter and ignore the noise.