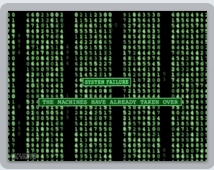 Marc Andreessen recently wrote a long article in the WSJ which he asserted that “Software Is Eating The World.” I enjoyed reading it, but I don’t think it goes far enough.

I believe the machines have already taken over and resistance is futile. Regardless of your view of the idea of the singularity, we are now in a new phase of what has been referred to in different ways, but most commonly as the “information revolution.” I’ve never liked that phrase, but I presume it’s widely used because of the parallels to the shift from an agriculture-based society to the industrial-based society commonly called the “industrial revolution.”

At the Defrag Conference I gave a keynote on this topic. For those of you who were there, please feel free to weigh in on whether the keynote was great, sucked, if you agreed, disagreed, were confused, mystified, offended, amused, or anything else that humans are capable of having as stimuli-response reactions.

I believe the phase we are currently in began in the early 1990’s with the invention of the World Wide Web and subsequent emergence of the commercial Internet. Those of us who were involved in creating and funding technology companies in the mid-to-late 1990’s had incredibly high hopes for where computers, the Web, and the Internet would lead. By 2002, we were wallowing around in the rubble of the dotcom bust, salvaging what we could while putting energy into new ideas and businesses that emerged with a vengence around 2005 and the idea of Web 2.0.

What we didn’t realize (or at least I didn’t realize) was that virtually all of the ideas from the late 1990’s about what would happen to traditional industries that the Internet would distrupt would actually happen, just a decade later. If you read Marc’s article carefully, you see the seeds of the current destruction of many traditional businesses in the pre-dotcom bubble efforts. It just took a while, and one more cycle for the traditional companies to relax and say “hah – once again we survived ‘technology'”, for them to be decimated.

Now, look forward twenty years. I believe that the notion of a biologically-enhanced computer, or a computer-enhanced human, will be commonplace. Today, it’s still an uncomfortable idea that lives mostly in university and government research labs and science fiction books and movies. But just let your brain take the leap that your iPhone is essentially making you a computer-enhanced human. Or even just a web browser and a Google search on your iPad. Sure – it’s not directly connected into your gray matter, but that’s just an issue of some work on the science side.

Extrapolating from how it’s working today and overlaying it with the innovation curve that we are on is mindblowing, if you let it be.

I expect this will be my intellectual obsession in 2012. I’m giving my Resistance is Futile talk at Fidelity in January to a bunch of execs. At some point I’ll record it and put it up on the web (assuming SOPA / PIPA doesn’t pass) but I’m happy to consider giving it to any group that is interested if it’s convenient for me – just email me.