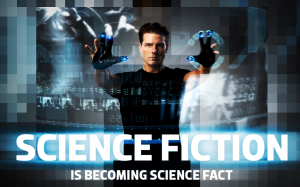 I gave a talk titled “Resistance Is Futile” yesterday in Park City at the annual meeting for one of our LPs. This is a version of a talk I’ve given several times, starting at Defrag last fall. The slides don’t change, but I make up the talk each time and tune it to the audience.

When I got to the slide titled Science Fiction Is Becoming Science Fact I went off on a version of my rant about the importance of reading, watching, and thinking about science fiction. I always use Oblong and co-founder John Underkoffler’s work as an example here since they have created a company around the iconic science fiction future that John envisioned for the movie Minority Report.

But then I mentioned a book I’d just read called Avogadro Corp. While it’s obviously a play on words with Google, it’s a tremendous book that a number of friends had recommended to me. In the vein of Daniel Suarez’s great books Daemon and Freedom (TM), it is science fiction that has a five year aperture – describing issues, in solid technical detail, that we are dealing with today that will impact us by 2015, if not sooner.

There are very few people who appreciate how quickly this is accelerating. The combination of software, the Internet, and the machines is completely transforming society and the human experience as we know it. As I stood overlooking Park City from the patio of a magnificent hotel, I thought that we really don’t have any idea what things are going to be like in twenty years. And that excites me to no end while simultaneously blowing my mind.

I’m spending the day tomorrow at the Silicon Flatirons Digital Broadband Migration Conference. This year’s theme is “The Challenges of Internet Law and Governance.” And, as we recently discovered with SOPA, PIPA, and now ACTA there are huge disconnects between government, lawyers, incumbents, and innovators. I’m on one panel which I’ll make sure is spicy – I hope others really get into the issues this year. There will be a live stream of the event on UStream (which is awesome – imagine the effort to do that 20 years ago) so you can watch it in real time if you want.

Every single person there needs to read Avogadro Corp, Daemon, and Freedom (TM). My guess is very few have. And that’s a problem for them, but not for the machines.