The Start-Up of You Debuts At #1 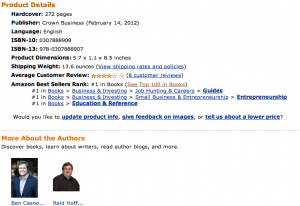 My close friend Ben Casnocha and Reid Hoffman’s new book The Start-Up of You is officially out. And – it’s #1 on Amazon. Not just in some obscure category like Business & Investing: Small Business & Entrepreneurship: Entrepreneurship, but #1 in all books on Amazon. That’s awesomely cool. And well deserved.

I met Ben about a decade ago. He came to Mobius with his dad to talk about his company Comcate. I think he was 14 or so at the time. I fell in love with him in the first meeting and have been a friend of his ever since. He’s been involved in many things that I’ve worked on, including being an early TechStars mentor and we generally get together for a few days (with my wife Amy) every year or so. It’s been a blast to be part of Ben’s transition from precocious young high school entrepreneur to best selling author (and I expect – after Sunday’s New York Times comes out, a NY Times Bestselling author.)

While I’ve known Reid for a shorter period of time, we’ve spent a fair amount of time together over the past four years as fellow board members at Zynga. A few years ago Reid asked me what I knew about Ben. They’d been hooked up and were talking about doing a book together. When Reid described what he was talking to Ben about, without hesitation I said “Ben’s your guy – you’ll love working with him and he’ll do an awesome job.”

The Start-Up of You is the result of their collaboration. If you haven’t bought it yet, go buy it now – it’s excellent and highly relevant to every human on the planet.