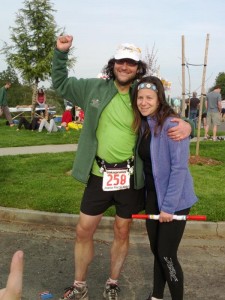 Wow. That was an amazing experience. I ran the American River 50 Mile Endurance Run on Saturday and finished in an official time of 11:57:37, just under my goal of 12 hours. My un-official mile by mile splits are up on RunKeeper which served me well with my iPhone 4S and Mophie Juice Pack until the very last few minutes when my battery finally died on my phone. Before I get into the story of the race, thanks for everyone out there who supported me in any way – it was awesome to scan through the twitter stream and comments post race.

Today’s post is the blow by blow of the race. I’m going to spend a few more days and process the emotional dynamic before I write about it. I’m still in the middle of it – yesterday was emotionally really hard; today feels more normal, but I expect to have lots more ups and downs this week as my thoughts, and my brain chemistry, sorts itself out. So I’ll consolidate the deeper emotional reflection into one post some time in the future. For now, here’s what I remember of the experience.

The idea started some time last year when Katherine McIntyre, my partner Ryan’s wife who is an excellent marathoner and triathlete, said “do you want to do a 50?” She summarizes the windup in her post Crazytown – the short version is I said “sure – why not.” The picture above is of us moments after we finished – Katherine the studette turned in an 11:33:21.

The race started at 6am so I woke up at 4:30. I had a bagel, some peanut butter, and coffee with the hope that the coffee would do its magic trick. Amy called promptly at 5:30 to wish me good luck (she usually is with me but stayed home this time because of her broken wrist) and I hustled out the door with all my gear to meet Katherine, Ryan, their son, and my assistant Kelly in the lobby at 5:35 (the time specifically prescribed by Katherine after a minute long negotiation with me the previous night for between 5:40 and 5:30.) We did the last minute good morning do you have everything drill in the lobby of the hotel and got ready to hop in the car for the mile long drive to the start (no fucking way I was going to go an extra mile today.)

At that moment I had crisis #1. I run with two water bottles that are exactly the same. I’ve been training with them for months and they are extensions of my hands at this point. As I grabbed everything off the table, there was only one water bottle. I looked around frantically but there was still only one. “Fuck – where’s my other water bottle?” Everyone (including the eight year old with us) looked startled. “Fuck fuck fuck – those other runners must have accidentally grabbed it.”  After a minute of this it was time to go – the night manager gave me a bottle of water (very different than a “water bottle”) so at least I’d have two and off we went. I took a deep breath and calmed down as best as I could.

The start of the race was uneventful. It was dark and cold so I was happy I dressed with two shirts (including a long sleeve shirt) and gloves. There were around 1000 people at the start (I think there were 800 runners) and everyone smelled like “eau de early morning start of race.” Within minutes we were running on the American River trail, our friend for 47 of the next 50 miles.

For the first two miles all I thought about was my fucking water bottle. I hated my bottle of water – it didn’t have a strap. After the second mile I decided to toss it to the side of the road, where I proceeded to obsess for another mile over my missing water bottle. At around mile three I noticed a water fountain on the trail, refilled my bottle, and decided that if my friend Andy Sack could go through life with one testicle, I could handle the race with one water bottle. That was the last time I thought about my water bottle until after the race.

The first 10 miles were easy. I used an 8:2 run:walk pace and held myself back. My coach Gary had told me numerous times to take it easy on the marathon segment. While my last marathon was 4:28 and I felt in better shape, I decided I would try to do the marathon in 5:30. Whenever I felt myself picking it up, I reigned myself in and took it easy. The sun came up, it started to warm up, and I enjoyed myself.

The next 10 miles were also easy. The only annoying part in this segment were the bikers. 80% of them were fine, 10% were super nice, and 10% were abusive assholes. “Get out of the way – bike coming through”, “Runners are supposed to stay on the left”, and “Get the fuck out of my way” were some of the things I remembered. I almost got hit head on by a guy going 20+ mph swerving in and out of runners. It was a curvy path which made it even harder – the “runner drift” settled in a little around mile 15 (where it’s impossible to stay focused on a straight line) and I remember looking up a few times and being startled by a bike heading right at me. I found out later that there have been a lot of battles about this in the past – apparently it’s a “bike path” and bikes are “superior” to runners. You’d think for one day a year they could close the path to bikes, but someone on the run mentioned there’s even been a court case about it. So for 10 miles the 10% of the bikers who were assholes spoiled the runner / biker relationship for everyone.

Before I knew it I’d gone through the marathon point right at around 5:30. I still felt fine – kept it slow – and had plenty of water. The aid stations were awesome – better manned than many of the marathons I’ve been part of, so my fueling strategy was working fine. I took a Gu gel every 30 minutes with water and a salt tablet every hour. At the aid stations I refilled my water, grabbed a few more Gu’s, and ate some pretzels, boiled potatoes and salt, and a dixie cup of coke (yum). There was a huge aid station at mile 27 (Beal’s Point) where I saw Ryan and his son and heard the best line of the day “this is a race, not a birthday party.” The line was wrong – it was a party – and a good one.

By mile 29 it hit me that I’d now run the furthest distance in my life. I went through mile 30 with the thought of “only 20 miles to go.” And this is when it started getting really hard. The segment between 30 and 40 was physically and mentally tough. It was a technical trail run – not the hardest I’d been on, but there were some gnarly parts. I’m an ok trail runner but hadn’t trained much on trails during the winter in Boulder so I was extra careful, which took even more mental energy. By the mid-30’s my pace had slowed from 12 minute miles to 18 – 20 minute miles, which became depressing. I only had one really dark mile where I started feeling sorry for myself, but during this mile I got a hilarious txt message from my friend Andy which jolted me out of my dark spot. There were a few horses on the trail – I’m terrified of horses so these spots were emotionally bizarre moments for me – but the horse people were super nice.

At mile 41 I met up with my assistant Kelly at an aid station where she joined me for the last nine miles. Ryan and his son was there again and after a fuel refill and an exploding fist bump we were on our way. At this point I only had one more trip to the office from Eldo and I knew I’d get it done. I was physically tired but had a nice pick up emotionally as I entered hour #10 of the run.

Somewhere around mile 43 or 44 I started having trouble getting my feet to go where I wanted them to go. Up to this point I hadn’t had much real difficultly on the trail, but now I was stumbling all over the place. After a few minutes of this I took two salt tabs hoping that would help. It did – 15 minutes later I was back to normal, whatever that meant. I have no idea if this was physiological or psychological, but by 45 I was motoring along pretty well. Every now and then Kelly would say something to jolt me out of my stupor – one that I remember was “Do you want to talk about cap tables for a little while?”

At mile 47 we started a long uphill climb to the finish. At the base of the hill was some eye candy – for the women. The aid station was called Last Gasp and the guys manning it were all shirtless ultra runners who ran to us, grabbed our water bottles, and had them refilled by the time we got to the aid station. These guys each had that crazy v-shaped abdominal muscle – I think it’s the inguinal ligament – with insane definition pointing suggestively – well – you get the idea. “I used to look like that – except for the muscle part” I told Kelly as we finally got out of range of the Adonises.

The last three miles is 1000 ft uphill. Everyone walked. There was a short downhill stretch – I took off running with a loud manic scream at the top of my lungs. As we went through mile 48 I realized I might break 12 hours. At 49.25 it flattened out and I sprinted for the finish and came in two minutes and change under my goal.

Katherine, Ryan, and their son were at the finish line waiting for me. Katherine looked great – she’d had a lot of knee pain during the trail part after falling once, but she had good color and a great attitude. After a few minutes of congratulations and hanging out, Kelly and I piled into our car and went to Chevy’s for my first non-Gu meal in 12 hours while Katherine and crew drove back to San Francisco to have some “excellent pizza” that they could only find in San Francisco. I called Amy and had a celebratory talk – she had done an awesome job of keeping track of things during the race (due to RunKeeper live) and being my communications director for the day. I dropped my coach Gary a note of thanks and then ate and ate and drank a beer and ate some more.

When I got back to my room, I discovered a very lonely second water bottle sitting just where I had left it 14 hours earlier. For the first time all day I had tears in my eyes, but of laughter – at myself. Staring at the water bottle that had bedeviled me during the first part of the run it finally hit home that I had just run 50 miles.