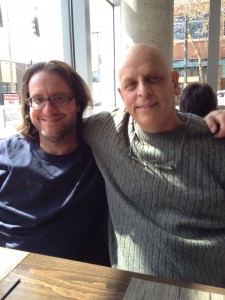 I was going to write something about a new book I’ve just published but I woke up this morning and that felt trivial so I’m going to save it for next week. Instead, I’m going to talk about my day yesterday.

My long time friend (dating back to the mid-1990’s) Andy Sack has testicular cancer. Before I get into things, he’s in the middle of chemo, has a 95%+ cure rate, is open and public about what he’s going through, and has an incredibly positive attitude.

I’ve tried to call or write Andy every day since his diagnosis. I’ve probably done it 80% of the time (I know I’ve missed a few days.) Every day at 5pm my iPhone gives me a reminder to “call Andy Sack.” Most of the time I get his voice mail and leave a message, other times we talk for a few minutes. While I was off the grid last week in Hawaii I sent him a postcard every day. Either way, I get a chance to tell him that I’m thinking of him and give him some additional energy from out in the universe, wherever I am. But this was the first time I’ve been able to get to Seattle to spend time with him.

I took the early flight from Denver to Seattle and we met up at the Kinect Accelerator where the program has just started. We found a room to just sit and talk for about 45 minutes. After a hug and a heart felt welcome, we started talking about how things were going. Our first 15 minutes were filled with lots of tears and emotion as I gave Andy a gift from a few of his friends including me and Amy and we connected physically for the first time since he was diagnosed.

I was curious about the experience he was having and he was very open about chemo, how it impacted him, and what the process was. We talked some about the dynamic of a loved one being sick or hurt since Amy’s had a broken arm for the past few weeks. While the broken arm isn’t in the same category as cancer, it has changed the way I’ve thought about caregiving as it’s the first time I’ve had to be – in Amy’s words “her man servant” – in our relationship. Amy called during this time and when the Imperial March (Amy’s personal ringtone) started playing on my iPhone Andy laughed a good belly laugh. I put Amy on speaker, the three of us had a nice talk, and then we wrapped up and had a TechStars related meeting.

We went to lunch with David Cohen, the CEO of TechStars. We talked about work, but we also talked about life. Andy was total present – he was having a good day physically and emotionally – and it was great to be around. After lunch David got in an Uber and headed to the airport to go back to Boulder; Andy and I walked around the corner to his office and BigDoor’s office (he’s on the board of BigDoor with me, their office is on the first floor, his is on the second.) I said hello to the BigDoor folks, hung out for a while and caught up on email while Andy had a meeting upstairs, and then he drove me to my hotel and we said goodbye for the day.

I had a few more meetings and then ended back up at the Kinect Accelerator for the Mentor Mixer. The program started on Monday and this was the first meeting of all the mentors. I gave a talk about how to be an effective mentor during the introduction to the program and afterward noticed Andy in the back of the room. This was a nice surprise as I didn’t expect to see him again on this trip. We hung out at the mixer a little and then took off to go have another meal together – this time alone.  We talked about a few experiences in the distant past and I vividly remembered a dinner in Brookline in the 1990’s with Andy, Alexa (his wife), and Amy. I couldn’t remember the restaurant, but I had the visualization of the entire experience in my head and shared it with him (he remembered it also). We talked more about a wide range of things – some business, some personal – and just enjoyed being together.

I got more than my fair share of his time yesterday. And it was awesome. As I was laying bed at 11pm drifting off to sleep I thought of him some more, some of the ups and downs we’d had together, and how much I treasured him as a friend.

We’ve been through lots of things together. One of the first things he said to me when he saw me was “your support of me through this period eliminated any fears I had lingering about our relationship in the context of any money that I’ve lost for you.” I’ve invested in a number of things that Andy has done dating back to his first company (Abuzz, which was a success and acquired by the NY Times for about a 4.5x of my investment.) But we’ve also had lots of things not work (Bodyshop.com – 0.5x, Judy’s Book – 0.25x.) However, I never, ever have worried about it – my willingness to keep trying and working with great people trumps the specific returns of any individual transaction. And more importantly, my personal friendship and loyalty is built on trust and a long term arc of honesty, not transactional results. While we’ve both screwed up plenty of things along the way and had our share of disagreements, we always resolve them and move forward. I’ve told Andy this several times in the past, but when you face mortality you have a chance to really understand (and express) this.

I wore my Fuck Cancer shirt all day. Several people gave me positive comments on it and one stood out. Near the end of the day, a woman who I didn’t know said “great shirt.” She looked at me with acknowledgement and a real spark of connection occurred. I realized, at that moment, that cancer is a disease that defines many people at a profoundly deep level, especially when they survive it.

On Saturday I’m running a 50 mile race in Sacramento. I’ve been thinking about this all week as I try to get my mind into it. It’s been hard to get real focus on it because I’ve had a busy week and I know that Friday will be my transition day. But as I sit here, the 50 mile run doesn’t seem that hard. Sure – it’ll be a physical and emotional challenge, but it’s not surgery, a 64 day chemo regimen, and the emotional challenge of “beating cancer.”

Life is short. And uncertain. Live it every moment. Andy – thanks for being you and letting me be part of your life.