Learning A City By Running Around In It 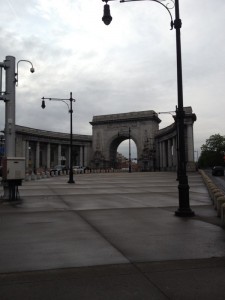 This morning I had a gritty, sweating, damp, dirty run down Bowery through Chinatown and back. It was a short run – only 30 minutes and my coach’s note for me was simple and clear: “One of those “throw away” runs that mean a lot to long term fitness improvement.” So I did it.

I’ve never run down Bowery. I’ve done the East River many times and ended up under the Manhattan and Brooklyn Bridge, but I don’t recall ever seeing them from the top. The Manhattan Bridge totally surprised me – as I approached it I had a sudden flashback to running in Paris around the Arc de Triomphe.

As I was running, I realized that I’ve learned many cities by running them. I used to be terrified of Paris – now I love it – and I attribute that to running all over the city. Rome fascinates me and I can run through it forever, always discovering new things. I’ve figured out how Manhattan works through all of my runs over the years. San Francisco is less of a mystery to me now that I’ve run all around the city. And I’ll never get lost in Boston or Cambridge because I’ve ran the damn thing so many times.

After my run I had breakfast and then walked from the East Village to Times Square in the rain for a meeting. Muggy, damp, soggy, dirty, grimy, splashy, gritty New York. Lots of construction, lots of noise, lots of people. But something magical about it. The perspective on foot is always powerful, at least to me.