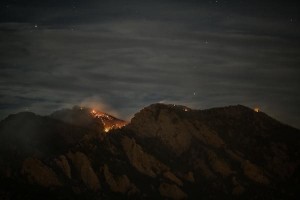 For starters, Amy and I are fine. The fires are not threatening our house (yet). But all we talked about at dinner last night at Ruby Tuesday was fire.

Colorado is having a horrible fire season. We are only at the end of June and have four massive wildfires going on in the state, including the High Park Fire in Fort Collins and the Waldo Canyon Fire in Colorado Springs. Yesterday afternoon as the Flagstaff Fire began in Boulder, I heard from a friend that she’d lost her house in the High Park Fire. Everything – totally burned to the ground. They were on a trip so they literally have nothing other than the clothes they had with them.

We live in an age where forest fires have hashtags #FlagstaffFire

Amy and I are in Keystone so we are 90 miles away from Boulder. We shifted into obsessive monitoring of Twitter hashtag mode around 5pm and eventually wandered downstairs and watched the 5:30 news to see live video of the fire. During this time dozens of emails came in from friends around the country asking if we were ok and offering to help, since Eldorado Canyon (where our home is) was mentioned as one of the risk areas. As of this morning we still seem safe but today will tell the story.

My brother Daniel is in more danger. His house is in Table Mesa and one ridge separates his house and the fire. He lives down the road from NCAR which I expect the country will be hearing about a lot today as the fire is adjacent to the NCAR land and building. I have a hard time believing that the fire could consume NCAR and get over the ridge, but who knows. Either way, Daniel and his family decamped to our condo in Boulder last night so they are safe, but I’m thinking of them constantly.

Amy and I have had to evacuate for fires twice. The first was one that was started on our land in Eldorado Canyon. There is a trail that borders our land and often people come off the trail to sit on a giant rock on our land. That giant rock used to have a bunch of trees near it. One morning, in 1999, when I was sitting at Cooley’s office with Mike Platt working on the deal that would become BodyShop.com, I got a frantic call from Amy that said simply “come home right now – our land is on fire.” She had woken up to smoke about a quarter of a mile away from our house. As the sun came up, the fire began to blaze. Ultimately 10 acres burned, we (and all of our neighbors) had to evacuate for the day (with 10 minutes notice), and we went through the mental process of “ok – if our house burns to the ground, all our stuff will be gone.” It was ultimately determined that a human – probably someone smoking a cigarette or a joint on the rock – started the fire the night before. For two days, we had 50 amazing firepeople living around our house protecting it as the fire got within 200 yards of our house. Amazing amazing people.

The second fire was the Walker Ranch Fire of 2000. This was a much larger fire – ultimately consuming thousands of acres – and resulted in a three day evacuation for us. It stalled one ridge away from Eldorado Canyon – if it had gotten over the last ridge it would have been a disaster. This time it started the weekend of my brother’s wedding so I spend his entire wedding completely distracted by the slurry bombers flying overhead. This one was much more stressful as it stretched out for days and days.

Last year the Four Mile Canyon fire threatened Boulder and was devastating to many people in the Boulder foothills. This was my partners first taste of real “scary fire shit” as both Ryan and Jason’s houses were on the edge of the evac zone. Since they both live in downtown Boulder, that’s terrifying to consider – if the fire ended up in the residential areas in downtown Boulder, that would have been really bad.

Basically, fire completely scares the shit out of me. I’ve read about 30 books on it and find it fascinating. scary, intense, amazing, and complicated. The anxiety that it provokes in me, and many others, is incredible. I’ve now had several friends who have lost all the physical things they had in a fire – they all have similar stories of complete and total disbelief followed by a powerful rebuilding phase.

As the sun comes up in Keystone this morning, it’s another beautiful day in Colorado. You wouldn’t know that 90 miles away an entire city faces a very threatening fire. This is a big planet, and days like this remind me how fragile it all is.

Here’s hoping the awesome firefighters in Boulder get things under control today. I’m sending good karma to all of my Boulder friends. And for everyone who reached out, thank you – you guys are awesome.