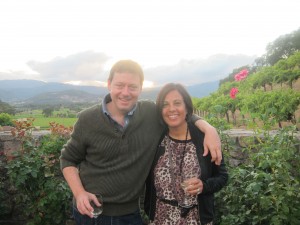 My long-time friends Fred Wilson and Joanne Wilson each had powerful posts about saying goodbye to 2012 and welcoming in 2013 yesterday.

Fred’s is titled Putting 2012 To Bed. I know many people who don’t know Fred other than via his online presence, public actions, and reputations. I expect that 99% of them, when asked if Fred had an awesome 2012, would say “of course – he has an amazing life.” But my answer would have been more nuanced based on the time Fred and I spent together. I would have said “some great things happened but it was a tough and complex year for him.” Fred’s response was characteristically blunt.

“I’ve wanted to write a year end post for days. I actually wrote one and stored it as a draft. But it comes across as a whiny complaint about the shitty year that 2012 was. And it was in many ways a shitty year for me. But the reason I couldn’t publish that post is it didn’t capture the greater picture that 2012 represents for me.”

The entire post is well worth reading. As is Joanne’s titled See ya 2012. Two big stressors from Joanne’s perspective were the damage to their house with their subsequent displacement from Hurricane Sandy and the shift to being empty nesters as their third kid gets ready to go to college. Her punch line is as powerful as Fred’s.

“This year I am hoping for a constant. I just want to live our lives under our own roof with no major disruptions. I could go for a real year of normalcy. 2013 is going to be a year for moving forward. Reflecting on the past and using that to move me forward. Not sure what that means but I will find out. The last few months we have lived out of more than 7 hotels and it is seriously thrown me off. Where it throws me, I will see. 2012 has taken me out of my game. I am hoping 2013 brings me back.”

My dad (Stan Feld) reminds us in his year end post that life is inches with a wonderful story of his from January 1, 1957.

All three of these posts brought me back to my December 3rd post titled Wow – That Was Intense which summarized a really tough period I went through last year between the start of September and the end of November. My dad’s post was especially poignant since if he had died on 1/1/57 I wouldn’t be here. And I so empathize with Fred – it’s hard for me to complain since overall my existence on this planet is awesome, but I had a really shitty three months at the end of the year.

I hit reset every year on my birthday (December 1) and describe it as “booting up a new version of myself” – in this case, v47. A month later I get to reflect on the reboot as everyone rings in the new year with hope, optimism, and renewal. If you had an Apple II, you know that hitting Reset rebooted the computer, so I’m not of the Ctrl-Alt-Del generation, but rather the Reset PR#6 generation. Either way, use whatever method you fancy and hit reset.

Welcome 2013. I’m looking forward to getting the most I can from the experience.