I’m spending the day working at Yesware. I’ve been an investor from inception and love what this company is doing. I also love the culture – I wrote about it in my post The Monastic Startup. If you use Gmail and Salesforce and are not also using Yesware, take a look at email for salespeople right now.

It’s an atypical day for me. I was supposed to be in DC all day today and tomorrow. I had full days of meetings, including two Startup Communities related events – one with the World Bank and one with a Congressional Caucus on Innovation. I had a few company meetings along with some stuff I was exploring. And I was going to drop in on 1776 and check it out.

Congress decided to shut down for the week because of the pending snow storm so the two events I built my trip around (the World Bank and the Congressional Caucus) were cancelled. So I decided to punt on going to DC and stay in Boston. I decided to have a “work at one of the companies I’m an investor in” day and get caught up on some stuff.

Last night before dinner I had a phone call with someone who gave me a great metaphor about “filling up your gas tank.” We were talking about the introvert / extrovert dynamic and how always being in “give / support mode” drains an introvert like me. He suggested that I make sure I do things on a daily basis that fill up my gas tank. Yup – that makes sense. But then he said something that was a new thought to me.

“Encourage everyone you work with to put some gas in someone else’s tank every day.”

It’s totally consistent with my give before you get philosophy, but it’s got a nice twist. Rather than being random, be deliberate about doing it, but random about how you do it.

For example, when a friend of mine had testicular cancer last year, I called him every day for 60 days during his chemo regimen. While I only talked to him every two or three days, I always left him a message. I was filling up his gas tank a little each day.

Another example is that I try to randomly call a different CEO of a company I’m on the board of every day. I don’t manage to do this every day, but I try. These are short calls, often voice mails that just startup with “Hey – thinking of you – no need to call me back.” I then often offer up an observation about something positive I see going on.

I like to be impulsive when I’m on the road. After lunch (I took out the Yesware team and yes, I paid) I stopped by Kinvey‘s new office on 99 Summer which is around the corner from Yesware. Kinvey went through TechStars several years ago and while we didn’t participate in their venture financing, I love the company and especially the CEO Sravish. I surprised him, gave him a hug, got a tour of the place, grabbed a few tshirts and some stickers, and headed back to Yesware. He sent me a link to a new post they just did titled The Boston Startup Map: Visualizing the City’s Tech Scene so I could do more random drop ins if I wanted. 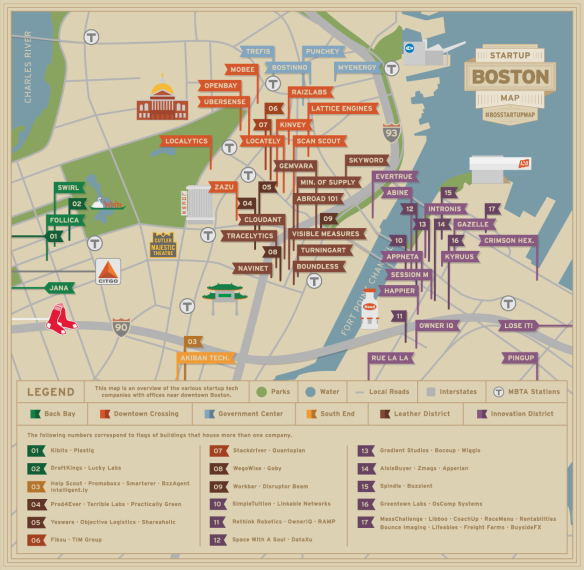 These aren’t programmed, scheduled calls in that I’m being deliberate in advance. They are just me filling up someone else’s gas tank with some random positive feedback in the midst of an otherwise chaotic life. And it makes me feel good.

So – go fill up some gas tanks today. And tomorrow.