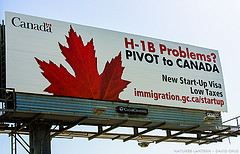 There is suddenly a lot of focus and attention on both of these issues. That’s good, and I’m hopeful that it will result in some meaningful positive changes. It pains me to see other countries – such as Canada, the UK, and New Zealand – be more progressive, open, and forward thinking around entrepreneurship and innovation than the US. There are days when I’m discouraged by our political system, but as I’ve gotten older and spent more time with it the past few years, I’m getting to a zen state of not being discouraged, but rather accepting the reality of the process and just being consistent and clear about what I think is important and how to fix it.

On the patent front, Twitter recently finalized a powerful approach – the Innovator’s Patent Agreement (the IPA). With this, they’ve agreed – as a company – to only use their patents defensively. I think this is extraordinary leadership on Twitter’s part. Our government and the USPTO is not moving aggressively to fix a problem that is now stifling innovation in the software industry, so leaders in the software industry can, and should, take matters into the own hands. As Fred Wilson describes in his post today, the IPA is an incredibly clever and forward looking approach. I’m proud of my friends at Twitter for providing this leadership and I encourage entrepreneurs and investors to understand the IPA and consider applying it to their patent approached.