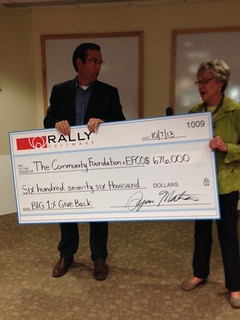 My day started out great. After getting up at 5, having a delightful run at 6, walking Brooks, and then hanging with Amy for four minutes, I got in my car and drove over to Rally Software for their Big 1% Give Back event.

The picture to the left is of Ryan Martens, Rally’s founder and CTO, giving Josie Health, the CEO of The Community Foundation Serving Boulder County, a check for $676,000. This check is for The Community Foundation and for the Entrepreneurs Foundation of Colorado (EFCO) and results from a gift of 24,793 shares of common stock from Rally at the time of its first financing that represented approximately 1% of the equity of the company.

I remember numerous conversations with Ryan about this. Ryan started Rally (formerly F4) out of our previous office and could regularly be found scribbling all over a white board. He had a huge vision that started to be turned into practice when Tim Miller joined him as CEO about a year after he started the company. Part of that vision became the agile software development products that Rally makes.

But Ryan’s vision was always bigger than that. He wanted to build a sense of corporate social responsibility into Rally from day one. He was inspired by Salesforce.com and the Salesforce Foundation so he wanted to do something similar in Boulder – contributing 1% of the equity and 1% of the employees’ time to local philanthropic efforts.

With a handful of others, including my partner Seth Levine and Cooley’s Mike Platt, Ryan helped created the Entrepreneurs Foundation of Colorado. Rally was one of five founding members – the others were NewsGator, Collective Intellect, Me.dium, and Tendril. At the time, no one really knew how this would end up, but we all believed that it was important for the local startup community (which included companies anywhere in Colorado, not just Boulder) to give back to the community that helped support it.

We talked about creating millions of dollars of philanthropic contributions through the success of companies in Colorado over the next few decades. Some people rolled their eyes when we talked about this, some thought we were crazy, and some jumped on board. Throughout, Ryan’s leadership of EFCO was unbounded and today over 50 companies are members of EFCO.

Today’s gift represents the largest to date. Oh – that check is only for $676,000. Well the other one – for $643,000 – is the second check Josie got today – this one from an additional gift Rally made when they endowed the Rally for Impact Foundation.

Gang – well done. Thanks for leading by example. And we are only just beginning. 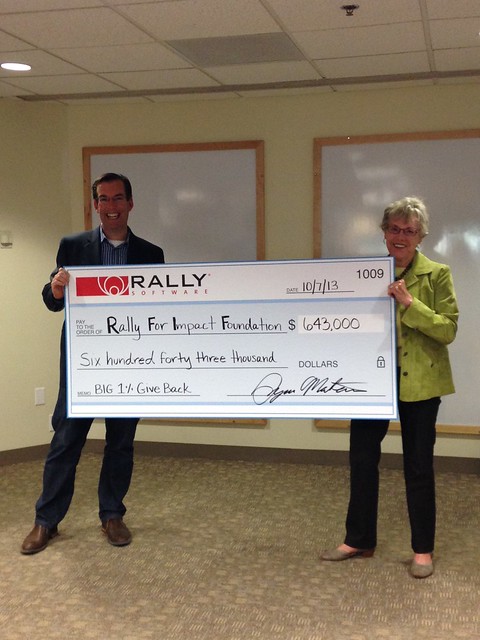