We just led a $35 million financing at Formlabs. In case you were wondering, lasers are super cool.

In 2010, when we invested in MakerBot, the maker movement was just beginning. While 3D printing technology had been around for 30 years, there were no desktop 3D printers. The concept of using an additive process for 3D printing, where you built up a 3D object from continuous extrusion of a material such as ABS or PLA (plastics) was well understood. But this technology had not been brought to the desktop at a $2,000 price point. MakerBot did that and created an entirely new market segment within the 3D printing industry.

In 2011, at about the same time that MakerBot was starting to scale, another new company – Formlabs – was founded with the vision of also creating a desktop 3D printer. However, unlike the technology that MakerBot used which was called FDM (Fused Deposition Modeling), Formlabs used a technology called SLA (Stereolithography) which has many advantages over FDM, but is more complicated to implement. As a result, it took Formlabs longer to get their product into the market.

In the fall of 2012, Formlabs did a $2.95 million Kickstarter campaign. In the early summer of 2013, around the time Stratasys acquired MakerBot, Formlabs started shipping their Form 1 printer. By the end of 2015, Formlabs shipped their Form 2 printer, which is a spectacular product.

While we knew Formlabs because of our MakerBot investment, we didn’t meet Max until after Stratasys had acquired MakerBot. I knew Max from a distance because we were both in the Netflix documentary Print the Legend. Even though there are many cringe-worthy moments, it’s a powerful story about the creation and emergence of MakerBot, Formlabs, and desktop 3D printing.

In 2014 Max hunted me down at a talk I did in Boston hosted by Katie Rae and Reed Sturtevant with my uncle Charlie about his book The Calloway Way: Results and Integrity. We talked for a little while and he made a powerful impression on me that I tucked away deep inside my brain.

This spring, Max and his cofounder Natan Linder reached out to me about having Foundry Group lead a financing. The company had only raised one major round of $19 million, led by Barry Schuler at DFJ Growth. Barry had a long history with 3D printing and he had put in a term sheet to lead the round Makerbot was considering. When Stratasys acquired the company, Barry invested in Formlabs. I’m on the board of littleBits with Barry and have loved working with him so between Barry’s encouragement, Max’s direct approach, and my love of lasers, we dug into Formlabs.

In the past two years, 3D printing has gone through the classic Gartner Hype Cycle bottoming out in the trough of disillusionment. 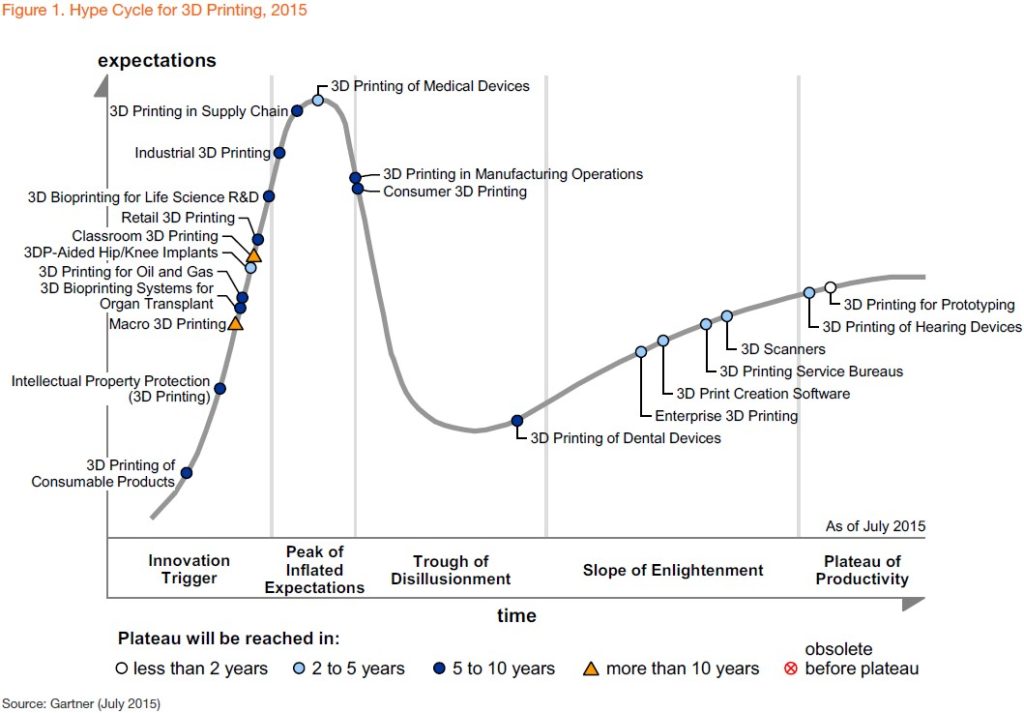 At this point, we think there is an enormous void for a new market leader as we move into the slope of enlightenment. We are honored to get another shot at this with our investment in Formlabs.

Oh – and lasers are super cool.