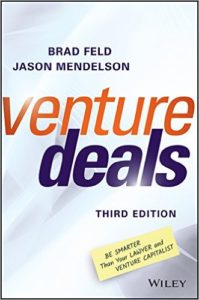 Venture Deals v3 (the third edition) is now shipping in both hardcover and Kindle.

If you are looking for a last minute holiday gift for your favorite entrepreneur (or lawyer, VC, or angel investor), we’ve got you covered.

Jason and I wrote the first edition of Venture Deals in 2011. When we were updating it for v3, I read every single word several times. It’s pretty cool how much it has held up over the last five years and we are delighted that it continues to be at the top of the Amazon bestseller list for Venture Capital books.

We added some new things in v3 and fixed a few things that were either unclear or wrong. This includes:

Jason and I finally sprung for the VentureDeals.com domain and moved all the old AskTheVC posts over. We’ve got a lot of cleanup and updating to do on the site – that’ll happen over the next month. Then, around the end of January we’ll start rolling out the teaching guide to Venture Deals on the site along with a bunch of ancillary materials for this.

For everyone who has supported us along the way, either by purchasing a book, giving us feedback, or just helping us get smarter about doing deals, thank you.