Introducing the Cap Table and Hiring the CTO

As Finance Fridays continues, we are introducing the concept of the Cap Table. We recognize that we are still at the very early basics stage, but as we are taking a case study approach to this we feel like we have to set up all of the pieces before we get into the messy guts. Hopefully you are staying with us and finding this useful – feedback welcome!

Jane and Dick, our fearless cofounders of SayAhh, have set up an accounting system and created their first set of financial statements. This week they set out to create their cap table and hire a CTO.

The founders each have common shares that will vest over four years. The vesting schedule protects each of the co-founders in case one gets hit by a bus or decides to drop the project after a short period of time. Also, there is an important tax election called an 83(b) election that they made which allows them to recognize and pay taxes for very small income of the value of the shares. Later, if they sell, the low tax basis and capital gains tax rates result in a lower tax liability than if they didn’t file the 83(b) election.

Equity is split 55% and 45%, but where is that officially recorded? It is not in the three primary financial statements (the Balance Sheet, Profit & Loss, and Cash Flow Statement.) Rather, it gets recorded in a document called the Capitalization Table (or “Cap Table”), which shows the ownership stake each person or entity has in the business.

Below you can see Jane and Dick own 55% and 45%, respectively. As first time entrepreneurs they did not create an employee options pool; we’ll fix that in a little while. 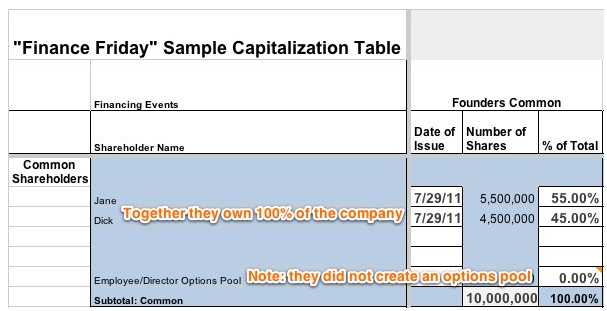 Jane and Dick want to bring in their friend Praveena as CTO, but they don’t know how to structure the compensation. They come up with two options:

The benefit of hiring Praveena is they think they could keep more equity and control of the company. But, Praveena hails from the land of big paychecks and is not ready to leave that without considerable equity. With the funds Jane and Dick have, a big salary is not possible. Praveena wants to invest $20,000 and get 20% equity.

After several discussions (and more beer), Jane and Dick agreed with Praveena to bring her on as a cofounder where she invests $20,000 and also gets 15% equity. Praveena is just like the other two founders, where her equity will vest over 4 years. Time to update the cap table.

When you read the cap table, think of it as a series of events that add new columns to the right. Now there are two events: the initial issuance of founders common shares, and then issuing new founders common shares along with creating an options pool. In this manner, you can see both the current equity distribution of the company, as well as historically what the equity holdings looked like.

If the full pool were to be given out, the dilution is fairly significant to the founders. They would own from 55% and 45% down to 36% and 29%, but until options are exercised they are not diluted. Jane and Dick contemplated a small option pool because they had read about the risk of an option pool shuffle, but ultimately decided to make it 20% based on feedback from their friend Josh, a Boston-based venture capitalist.

Our (now three) co-founders begin building out their product. The co-founders have savings to live off of and cash will be conserved by not having any salaries. Next week we will fast forward to when they have a beta product and they build a model to pitch to investors.