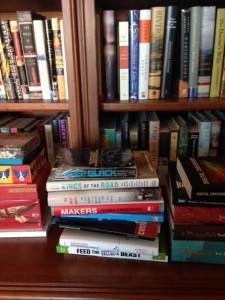 I’ve been reading a lot lately. On an almost daily basis, someone out in the world sends me a physical book, which I love. While I have something like 500 unread books on my Kindle, I still love laying on the couch reading a physical book. So the stacks of books that show up keep me company and I chomp through them whenever I need a break from everything else.

Yesterday I read No Better Time: The Brief, Remarkable Life of Danny Lewin, the Genius Who Transformed the Internet. It was awesome and I recommend it for any entrepreneur out there either working on a company or thinking about starting a company.

If you don’t recognize the name Danny Lewin there are two big things to know before you dive into this book. First, he was the co-founder of Akamai Technologies (NASDAQ: AKAM – currently valued at $8 billion.)  Second, he was likely the very first person to die in the 9/11 attack.

There are lots of other interesting and unexpected things to know about Danny before you start the book. He was born in Denver. His parents made aliyah to Israel when he was a young teenager. He was built like a tank and was a member of Israel’s Sayeret Matkal. He longed to be at MIT.

Akamai’s original name was Cachet Technologies. They entered, but didn’t win, the MIT $50K competition in 1998. As a judge for the MIT $50k until 1996, there were always a lot of VCs hanging around. In this case, however, the only VC who truly had conviction to get behind Akamai was Todd Dagres – then of Battery Ventures, now of Spark Capital.

Akamai was an amazing pre-Internet bubble story. From nothing to IPO in less than 18 months, a market cap of > $20 billion, followed by a 99% decline in the stock price post-bubble. Over the last decade, however, they’ve demonstrated that they have a real business, now valued at $8 billion with Q313 revenue of $396m, Q313 GAAP Net Income of $80m, and cash flow from operations in Q313 of +$158m. Not bad for a company that was written off completely a decade ago.

This is the story of the creation of that company. And the people behind the creation, mostly notably Lewin. The author, Molly Knight Raskin, writes beautifully, deeply, and thoughtfully. She combines an origin story (for Akamai), a coming of age story (for Lewin), and a tragedy (for Lewin, his family, his extended family, and Akamai.) While the tragic ending, which comes much to early, is the end of the book, it’s short (less than 10% of the book), appropriate in its level of drama, and helps us process the amazing life that Lewin lived.

I’m tired of the classic boom bust popular media story arc of “hero emerges from nothing, the hero does amazing things, bad things happen and the hero crashes, watch how the hero is no longer a hero, the hero fights and claws his way out of the cellar and rises again to be a hero.” This is not one of those books. Instead, it’s a great biography of an entrepreneur, his company, and his all too short life.