Among all the distressing news of the world, I heard today that AOL Instant Messenger is shutting down on 12/15/17. 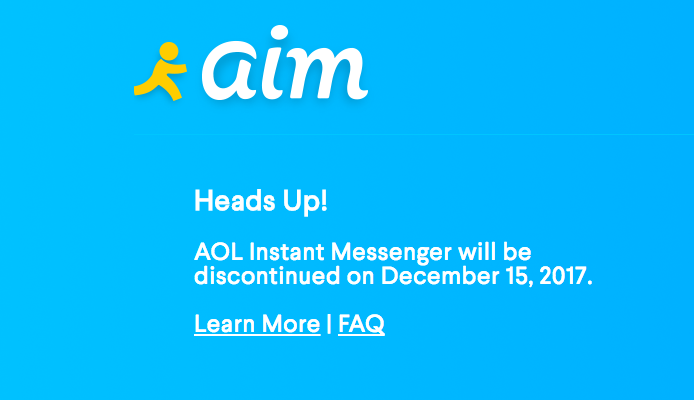 AIM was the first instant messenger I used. My AOL account handle was bfeld, which stuck and is generally my handle for all things (like Twitter) unless someone else grabbed it, in which case it’s bradfeld.

On 9/11/01, I was in NYC. I had taken a redeye the night before so I took a nap in the hotel room after I checked in and slept through the first World Trade Center tower collapse. When I woke up I was disoriented from my redeye and totally confused (like many) as to what was going on. I called Amy and caught her on the way to the airport (she was heading to NYC) and had been trying to reach me but couldn’t. There were tears but we figured out enough that she turned around and went home.

That was the last phone call I was able to make for a while. I was in the Benjamin Hotel and the phone wasn’t able to dial out. My cell phone couldn’t get a signal. As a last resort, I turned on my computer to see if I could connect to the hotel Internet.

That worked just fine. All of my IM apps opened up (AOL, Yahoo, Microsoft, and ICQ). Email worked fine also.

So for the rest of 9/11, until I went to Jenny Lawton’s house in the evening with Paul Berberian and Nick Cuccaro to get Jenny’s car and drive home to Boulder, I hovered over my computer.

AOL IM was probably 10x more active than the other IM apps combined. Amy and I went back and forth in real time throughout the day. My Mobius partners were equally distributed across AOL and Yahoo and a few randoms were on Microsoft and ICQ.

The little yellow AIM man was burned into my brain that day. I can’t imagine getting through 9/11 without him – and AIM.

AIM – you served me well for many years. Thank you. May you rest in peace for all of digital eternity.

Book: The Third Wave: An Entrepreneur’s Vision of the Future

Every entrepreneur out there should grab a copy of The Third Wave: An Entrepreneur’s Vision of the Future by Steve Case and read it.

If you don’t know Steve, you’ve probably heard of him. He’s had a remarkably entrepreneurial journey starting with co-founding AOL in the 1980s. While AOL has now been absorbed into Verizon (after having been bought, spun out, and bought again) at its peak around 2000 nearly half of all Internet users in the US accessed the internet via AOL and everyone over the age of 40 knows how to say “You have mail.”

I’ve gotten to know Steve over the past six years through the Startup America Partnership (where he was Chairman) and then UP Global (where he was also Chairman). I’ve learned a lot from him both from reflecting on the past and talking about the future.

I was excited when he told me he was finally writing a book. I loved the title, as I’m a big Alvin Toffler fan as I describe in my post from nine months ago titled What Is The “Third Wave” Of This Generation? I didn’t have an answer for this question got an email a few days later from Steve.

“Hi Brad. I saw your tweet and blog. I too was inspired by Toffler’s Third Wave. I’m now working on a book (my first!) with some of my recollections of the past, but mostly my perspectives on the future. And, in part to honor Toffler, I’m calling it The Third Wave. I’m finalizing the manuscript now. It builds off the article I wrote for the Washington Post a few months ago. Happy to send the current draft to you to critique, if you have time to read it in the next week. (I have told Simon & Schuster they’d get a final manuscript at the end of the month.) Let me know if you’d like to see it. Thanks.”

A week later I’d read it and got some specific suggestions back to Steve with the punch line:

“Overall I think the book is excellent. I love the thesis about The Third Wave as applied to entrepreneurship.”

This is an important book that I think will stimulate a lot of thinking about the future for any entrepreneur. It also helps understand the potential futures better by reflecting on the past through Steve’s own journey, especially around AOL.

If you are an entrepreneur, make time to read The Third Wave: An Entrepreneur’s Vision of the Future. Steve – thanks for taking the time to write it.

I got to work closely with Luke Beatty this summer while he was running the Techstars Boulder program. In one word, he’s “awesome.” Deeply, truly awesome.

I knew Luke from a distance – we’d crossed paths a few times but never worked together. I watched him build a real company with Associated Content and sell it to Yahoo for $100 million. When David Cohen asked me what I thought of him for Managing Director of Techstars Boulder, I responded “Awesome if you can get him.”

Luke ran an amazing program this summer. I spent at least an hour a week with him and all the CEOs in the program in our top secret weekly CEO session. We worked together on the Intuit acquisition of GoodApril. And a bunch of other things.

I wasn’t surprised when Tim Armstrong at AOL made him an offer he couldn’t refuse and Luke joined AOL as Head of Strategic Partnerships. I knew Luke and Tim had gone to school together, were close friends, and that Tim was the first investor in Associated Content. While I’m bummed that Luke isn’t running Techstars Boulder anymore, I’m psyched I got a chance to really know him over the summer. Plus, it amuses me that he now has to use AOL Mail as his email system.

Come join us at Entrepreneurs Unplugged on Monday 10/7 at 6:15 at ATLAS. Register here.