The audiobooks for The Startup Community Way and Startup Communities, 2e are both available. I’ve gotten this request from many people, so I’m glad they are finally out.

If you are an Audible listener, you can get them at:

The Audiobook.com versions are available at: 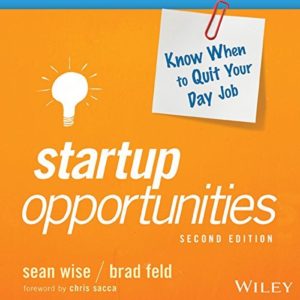 The audiobook version of Startup Opportunities: Know When To Quit Your Day Job is now available on Audible.

Unlike the Audible version of Venture Deals, this one was read by Stephen Hoye.

If you like audiobooks, grab a copy, give it a listen, and tell me what you think.

The third edition of Venture Deals is now available on Audible. It’s the unabridged version read by me and my partner/co-author Jason Mendelson with guest appearances by Matt Blumberg.

We’ve been getting requests for an unabridged audio version of Venture Deals since we first came out with the book in 2012. We like to think that it has now aged like a good wine.

If you are an audiobook person, you can know hear the dulcet tones of Jason’s voice alongside the scratchy whine (which has aged) of mine while learning how to be smarter than your VC and your lawyer.