Brooks was an awesome dog. He was dog number 3, following Denali and Kenai. Definitely the cuddliest of the three. Always happy. He loved bagels, salmon, and tissue boxes. We ran in Keystone together and did laps around my house at St. Vrain for years until he couldn’t run anymore. He loved chasing bunnies, even if he never caught any. When he was young he loved to swim, but decided that wasn’t for him after he walked straight into the deep end of our new pool on his introduction to our St. Vrain house (we laughed so hard it was challenging to fish him out …)

When Amy and I talk about “Golden Retriever eyes” we are thinking of Brooks. Deep, black, and full of love, especially if you were holding a bagel. Or a piece of salmon.

At some point, he decided he was going to sleep on the bed. Early on we tried to convince him the bed was just for the two of us. I traveled a lot, so when I was gone he slept on my side of the bed. When I was home, he slept at the foot of the bed. Eventually, we got a bigger bed.

When he was a puppy, Kenai took good care of him (Kenai is on the left, Brooks is on the right)

When we got Cooper, he was annoyed for a while. Apparently he forgot that Kenai helped him grow up. Cooper was inscrutable and the first difficult puppy we had. Brooks figured this out before us and, while he’d occasionally assert his dominance, he generally gave Cooper a wide berth. When we sent Cooper to doggie boarding school for a month, we could tell that Brooks didn’t miss him. But, when Cooper came back, enough had changed that they were suddenly (and finally) buddies.

Cooper was extremely patient with Brooks the past few years as Brooks aged. When they ran together with me, Cooper would do his thing for a while but eventually hang back with Brooks who trotted along next to me at my slow pace.

Several months ago Brooks had a seizure. It turned out that he had a significant brain tumor. After being at the vet for a few nights, he came back home and was basically non-responsive. Amy and I cried all weekend, just hung out with him, and were ready to let him go.

We decided to give it one try with the vet where they dialed back some of his meds to see if he could get a few more months. While he still slept most of the time, he was ambulatory, happy, and somewhat responsive when he was awake.

Last Monday he had a series of seizures. Back to the vet he went, where the seizures continued. He passed on Saturday.

I thought of him a lot of my 12 loop run today. I write this with tears in my eyes. Brooks Batchelor, you were a wonder dog. Thanks for being part of our lives.

There was a disturbance in the Force yesterday.

Our old dog, Brooks (age 13 – on the left) had a seizure mid-afternoon. He spent the night in the hospital where he had another seizure. He’s there now being inspected and detected.

We are lucky to have great vet care and a Rover co-parent for Brooks who loves him as much as we do.

I called it quits at 5 pm shortly after my last scheduled meeting. Amy and I watched a few more episodes of Breaking Bad and went to sleep early. I got a good night sleep, but woke up feeling sad, scared, and disoriented.

Meditation and coffee has helped a little, but there’s definitely a part of me that wants to write off the day and just lay the couch, read a book, and play with Cooper and Brooks. 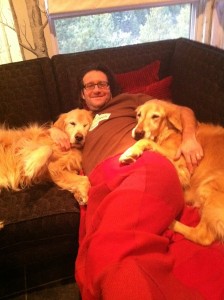 If you’ve been following along at home, you know I’ve had a tough fall. It started with a bike crash in Slovenia, followed by a few weeks in New York where I physically felt awful. Fortunately I was with Amy for her birthday (we celebrate her birthday for most of September), but I underestimated how long it would take me to recover. I ended the three week trip in San Francisco for my mom‘s 70th birthday, which was wonderful until I got a terrible stomach virus on Sunday morning. I can’t remember the last time I threw up – and as I somehow managed to get home that day, I’m sure I looked like warmed over shit. After a week at home I hit the road again around the release of Startup Communities and spent almost all of October on the road, reaching Boise, Oklahoma City, Chicago, Des Moines, San Francisco, Seattle, Detroit, Boston, Montreal, Toronto, Lexington, and Louisville. While I had a great time, ran a marathon in Detroit in the middle of it, and met a lot of awesome people, I totally shredded myself.

I got depressed. And then my dog Kenai, who I loved more than almost all the humans I know, died.

I turn 47 in a few weeks. I’m extraordinary lucky to be married to an amazing woman for 22 years. We’ve figured out how to have an awesome relationship in the context of an entrepreneurial life, and we are wrapping up a book on it that will be out in January. I have extremely meaningful work with three partners who are my best friends. I get to work with incredible companies and entrepreneurs every day. And I get to define how I spend my time.

But I’m totally and completely fried. And I did it to myself. I already spend 60+ hours a week working with the companies I’m an investor in. So – all of the stuff I’m doing around Startup Communities is extracurricular activity. Writing Startup Life, while super important to me, is an extra curricular activity. Travelling all over the place is part of my work, and I have a lot of fun doing it, but plenty of the places I’m going are extracurricular activities. I feel like I’m getting all of my primary work done, but I’m neglecting one big thing in the mix – me.

I’ve found myself in a similar position every year. This is nothing new for those close to me – I run extremely hot and often up to the edge of my capacity. I keep adding stuff on top with some fantasy that my capacity for new stuff is unlimited. There is so much I want to do and I just keep going after it. I have a good internal algorithm for making sure I get all the “urgent / important” stuff done and I’m very aware of what work to prioritize over other things. When I start reaching my capacity, I focus more on the important stuff – both urgent and non-urgent, and insert a tighter hierarchy around my work, making sure my partners and the companies I’m an investor in are at the top of the stack.

But I neglect me. And that’s what has happened again this year. My extrovert is completely used up. While I’ve got a few more commitments between now and the end of 2012, I’m resetting my priorities for the balance of the year and focusing internally, on me, my health, my physical self, Amy, my partners, the companies I’m an investor in, and the writing I want to do.

I’ve been through this before – well – about once a year for the past 25+ years, so I know how to deal with it when it happens, although I clearly don’t know how to prevent it from happening. Maybe I’ll figure that out in my 48th year on the planet.