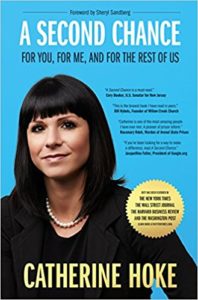 Cat Hoke’s book A Second Chance: For You, For Me, And For The Rest Of Us is out.

I wrote a long post about it in October when I read a draft of it. Cat is remarkable and she lucked out by partnering with the amazing Seth Godin on this book (Seth is the publisher).

I’m sending a copy to every CEO in our portfolio. We’ve got a pretty regular Foundry Group book club thing going at this point, as I know Rajat Bhargava and Will Herman’s book The Startup Playbook is also going out to a bunch of the CEOs. And each of my partners is getting a copy of Lee McIntyre’s Post-Truth this week.

I read a lot and encourage everyone around me to join in on the good stuff. Cat’s book is definitely good stuff. She mixes her own life journey with the mission of Defy Ventures along with the impact that Defy has had on so many people – both “entrepreneurs-in-training” and the volunteers who work with the EITs.

I’ve talked about Defy Ventures a lot on this blog and Amy and I have become significant supporters through both The Anchor Point Foundation and my volunteer engagement. I’m particularly proud, however, of my partner Jason and his wife Jenn who have picked up the mantle as co-chairs of Defy Ventures Colorado and launched the Colorado program. I was in prison with them, 50 volunteers, 50 EITs, ten people from the Defy team (including Cat), and Governor Hickenlooper two weeks ago.

All of this has been inspired, and led, by Cat. I didn’t know much about the US prison system prior to meeting Cat several years ago. My own journey with this has been incredibly powerful. Being able to experience it with other entrepreneurs and investors, including Jason and Jenn, a number of the Techstars team, and many others who I know has been wonderful.

If you want a pre-book taste, the Reboot podcast that I did with Jerry Colonna and Cat is a good start.

But, do yourself a favor. Buy Cat’s book A Second Chance. Read it, let it into your life, and ponder what a second chance really means.

P.S. I have several people in my life who I need to give a second chance to. I’m not ready yet, but I hope I will be at some point. And yes, the book will help you go deep on what this means for you.

I just finished the near-final draft of Cat Hoke’s upcoming book Second Chance. It is incredibly powerful on multiple levels.

I’ve gotten to know Cat reasonably well over the past year. I first heard of her through the Techstars Foundation, where we gave her organization – Defy Ventures – one of our very first grants. I first met her a few months later in my office. After hearing her pitch for 15 minutes, I said “Cat – I’m all in – no need to sell me. What can I do to help?”

Cat, in her inimitable style, said, “The first thing you should do is to come to prison with me.”

A few months later I spent the day at California State Prison, Los Angeles County in Lancaster with Cat, 50 EITs (Entrepreneurs-in-training), and 75 volunteers. I wrote about it as one of my top ten life experiences in my post Understanding Privilege – My Experience in Prison. Amy and I made a significant gift from our foundation (the Anchor Point Foundation) immediately after the trip and I joined the Defy Ventures board two months later.

Since then I’ve gotten to know Cat, her husband Charles, and the Defy Ventures organization. While I’ve learned a lot about prison, the criminal justice system, and the concept and experience of privilege, I’ve learned even more about myself. And I have Cat, Defy Ventures, and all of the people around Defy (both inside and outside of prison) to thank for that.

But, as Cat so eloquently says, she doesn’t scale. When I first heard of Defy, it was about 20 employees. Today it’s over 50 going to 100. Like many fast-growing startups, the CEO (Cat) has to evolve in her role. While it’s hard, Cat is doing a magnificent job of it. It was logical that she’d write a book about herself, her own second chance, Defy, the work that it does, and how/why it matters and impacts people and society.

Writing this book must have been incredibly challenging. Cat is an extremely hard worker. She travels constantly. Her work is emotionally intense and she puts 100% of herself into it. So, when I was on about page 80 of Second Chance, I thought to myself, “This is incredible. I can’t imagine how much extra energy of Cat’s went into this.”

She had one of the best guides in the world – Seth Godin. I’ve been friends with Seth since the mid-1990s when I met him doing diligence for SoftBank in conjunction with Fred Wilson on the investment that SoftBank and Flatiron Partners (Fred and Jerry Colonna’s new VC firm at the time) made in Seth’s company Yoyodyne (later acquired by Yahoo!). I felt a deep connection to Seth from day 1 and even though we don’t spend much time together, ever interaction with him is treasured by me.

I can see Seth’s fingerprints all over this book. As an enormous fan of Cat’s, I’m so glad Seth took this project on. I expect their collaboration will have an important and lasting impact on the world.

You’ll get more specifics, and a full review, once Cat’s book is published. Until then, if you are interested in learning more about Defy Ventures or getting involved in any way, just email me and I’ll connect you.

Joining the Defy Ventures Board

I recently joined the Defy Ventures board. If you aren’t familiar with Defy Ventures, here’s a post that I wrote after my first prison trip with them at the end of last year.

Early this morning, on my run in Melbourne as I tried to shrug off jet lag, I listened to a Reboot podcast that Jerry Colonna did with me and Cat Hoke, the CEO of Defy Ventures, a few weeks ago.

I had tears in my eyes while running, and I don’t think it was from my pace. Among other things, I’ve committed to bring Defy Ventures to Colorado in 2017. If this is something that is interesting to you either reach out to me or keep your eyes open for a broader fundraising initiative coming up (we’ve already raised 40% of the money needed to do this.)

And – enjoy the podcast. I think it’s one of the most powerful (at least to me) that I’ve participated in.