The Day Before Christmas

“Twas the night before Christmas, when all through the house
Not a creature was stirring, not even a mouse.
The stockings were hung by the chimney with care,
In hopes that St. Nicholas soon would be there.“

This is a confusing time of year for me. Hanna Ingber described it well this morning in her article My Jewish Sons Have a Christmas Tree, and I Need to Deal.

Fortunately, I don’t have children, my wife isn’t divorcing me, and she’s remarkably mellow about my Christmas confusion. But, when I read through Hanna’s article, I kept nodding my head up and down.

When I take a vacation, I generally go off the grid completely. But the last two weeks of the year never feel like a vacation to me. Many people in my world check out, go on vacation, and stop working. The pace of everything radically changes.

That’s ok. I spend my time writing, catching up on stuff that’s been lingering for a while, and read a lot.

But my disorientation really amplifies when I venture outside the safe confines of my house. Amy and I went to dinner Sunday at our favorite local Chinese place and faced an onslaught of Christmas music. She commented on the paper cutout snowflakes hanging on the windows. Pride lights were everywhere which made me smile until it occurred to me that they were probably simply Christmas lights.

“Twas the day before Christmas, when all through the blogosphere
Not a VC was writing, not even an associate.
VC Twitter showed exotic holiday trips and Medium was vigilant,
In hopes that the partners soon would be back.“

We decided to be completely American-counterculture this year and take our vacation in the middle of January when everyone is back in the madness of the new year. We’ll be celebrating the run-up to Chinese New Year.

Until then, I’m substituting Hildegard of Bingen and Sigur Ros for Christmas music.

Christmas Morning with The Velveteen Rabbit 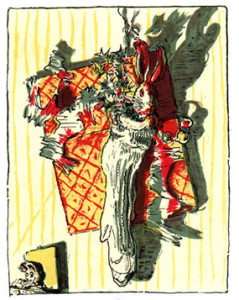 It’s a beautiful almost snowy morning in Boulder. Crisp and cold, but subdued. Amy is on the phone with a cousin, Brooks is asleep on the floor, and Cooper is whining a little every now and then but generally happy to be on his tether chilling out after running around the yard like a maniac puppy for 30 minutes.

For many years, Christmas time was difficult for me. With the help of my amazing wife, I adjusted my attitude about five years ago and in 2012 wrote a long post about it titled Christmas Isn’t Awesome For Everyone. Christmas still isn’t awesome for me, but I now have a mellow, relaxed time for the last two weeks of the year.

Amy and I celebrated Jewish Christmas by going to see The Force Awakens followed by a quick dinner at Tasty Asia in Longmont. We then came home and finished movie night by watching Captain America: The Winter Soldier. Perfect.

Yesterday, Danielle Morrill, the CEO of Mattermark who, with her husband Kevin, have become good friends over the past year Slacked me with:

“Not sure if you ever read this book, but my parents gave it to me as a kid and it is something I like to read out loud with them on Christmas https://digital.library.upenn.edu/women/williams/rabbit/rabbit.html“

I vaguely remember reading The Velveteen Rabbit as a kid 45 or so years ago. I knew the story was about a boy and his toy rabbit, but I didn’t remember anything else. I just finished reading it and it brought tears of happiness to the corners of my eyes. It’s a wonderful childrens story that the inner child in any person can enjoy.

If you’ve got young kids, consider trying what Danielle and her parents now do every Christmas and read The Velveteen Rabbit out loud together.

And – Danielle and Kevin – thanks for being part of my life in 2015. It’s been a joy working and becoming friends with the two of you.

Christmas Isn’t Awesome For Everyone

This is a tough time of year for a lot of people. I used to be one of them. And I’ve gotten over it, and myself, which I attribute 100% to Amy helping me figure it out and not being willing to put up with my nonsense. But it’s a useful reminder for those who think it’s awesome for everyone.

My struggle with this time of year is simple – I never had Christmas as a kid. I’m Jewish and my parents didn’t embrace the “ok – we’ll pretend like Christmas isn’t supposed to be about Jesus being born” so we never celebrated it. I recall existing in this parallel universe, where all my friends had this crazy gift foreplay for the month of December, talking about what they were going to get, running around with the parents getting things for their friends, and planning for the main event. It culminated in gift orgies on December 25th, wrapping paper flying, and endless gifts piled up to be played with, inspected, eaten, and traded.

As I got older, I got crankier about it. My first wife celebrated Christmas so we did it at her house, with her family. They were polite, but they never liked me very much, so the whole think was this awkward charade, which just made things worse. I refused to have a Christmas tree in my apartment, so my ex-wife and I fought every year around Christmas for the few years that we were together. And that sealed the deal for me – Christmas sucked.

I then went through the “why isn’t everyone working” phase of Christmas. I was resentful that everyone took two weeks off. C’mon – there’s work to be done! I’d grind through my work, being newly productive, cleaning up all the cruft I hadn’t gotten to, as everyone else partied and had fun.

I can’t remember what Amy and I did for Christmas for the first few years of our relationship, but after we moved to Boulder we started spending it with her family in Western Colorado. They were extremely nice to me and included me in everything they did, but I still felt like an alien in the midst of a strange human ritual. I recall spending hours huddled over a laptop trying to figure out the cheapest way to get a dial-in connection to check my email, even though no one was sending me email because it was Christmas.

At some point I just accepted that I was grumpy at this time of year. Disoriented. Confused. Sometimes a little depressed. Usually just bored. Amy put up with it, but kept nudging me to try different things.

A few years ago I finally turned a corner. We started spending the last two weeks of the year at our house in Keystone. We’d invite a variety of friends up for a few days. The only Christmas celebration we had was Jewish Christmas, where we went out for Chinese food and a movie on Christmas eve. We’ve recently augmented that with sushi and a movie on Christmas day night. Instead of being grumpy, I just chill out. I enjoy hanging out with whomever comes to visit. I read a lot, sleep a lot, and catch up on a bunch of stuff – mostly writing – that I get behind on. And I get rested and ready for the year ahead.

It took me a very long time to figure this out. Maybe I’m slow when it comes to decoding Christmas, but I’ve got a bunch of friends who also struggle with this time of year. I watch from a distance as couples bundle up their kids, stick them on a plane, and make a painful, stress-filled visit to some distant city where one of them grew up. Or my single friends searching for something – anything – to do other than a trip to their parents. Or others, just defaulting into a trip to where they grew up, knowing it’s going to suck but feeling powerless to do anything about it.

It’s ok not to love Christmas. But that doesn’t mean you have to be miserable for the last two weeks of December every year. If you aren’t loving the game, change it.