It wasn’t pretty, but I got it done. Marathon #16 was the Cincinnati Flying Pig and was the first marathon I’ve done in over a year. My march toward a marathon in every state continues. I’m not entirely sure what I’m doing in the photo below, but the medal proves I finished the marathon. 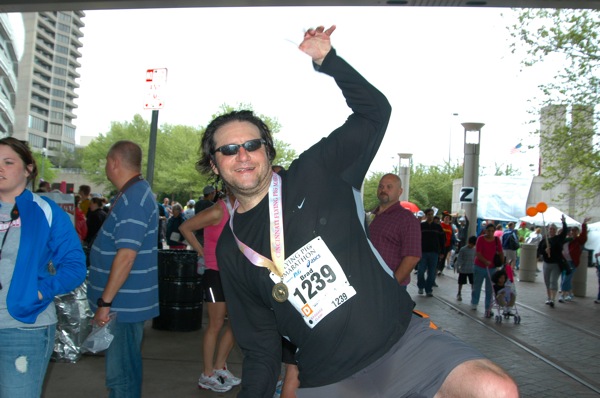 I’ve had a good month of training and expected I’d break five hours. My goal was to do 11:30’s for the first half and then pick it up for the second half and come in between 4:50 and 5:00.

Things started off pretty crummy. There was a light rain and I had trouble getting warmed up during the first few miles. I had a fierce headache and seriously considered dropping out around mile 5. I took my hat off to wipe my hair back and my headache miraculously disappeared. I looked inside the hat and realized the fabric had bunched up from the rain (it was a new baseball cap) and was pressing on my right temple. I ditched the hat and immediately felt better.

Miles 6 to 9 were a solid uphill climb. I like hills so it didn’t bother me much but at some point I felt like I was in an Escher print. I sped up a little in mile 10 but forced myself to slow down to stay on plan.

My plan worked fine for the first 13 miles and I went through the half way point at 2:33. I tried to pick it up a gear but had nothing in my legs. Aerobically I was fine – my heart rate never got above 160 – but my legs were just dead. Miles 14 to 20 basically sucked. I just slogged through them at a 12 to 13:30 pace. I had input / output problems by this point – I ended up with seven pee breaks along the course. I don’t really remember much of the last six miles, although by 24 I knew I had it in the bag and somehow managed to speed up a little.

I finished in 5:24:45 – a very slow marathon for me. But I crossed the finish line which is all I was really focused on.

Amy and I had a fun weekend in Cincinnati. The Flying Pig is a big festival so there was plenty of great marathon energy around town. My coach Gary Ditsch came up to see me run and we had dinner the night before with him and his wife Nikki. I had ice cream at Graeter’s every night, stayed in the classic Hilton Netherland, had Skyline Chili, and watched Atlas Shrugged in the old style Empire Theater. While the marathon was a struggle and I eventually got tired of the pig puns, our adventure across America continued with a satisfying and successful weekend in Cincinnati.