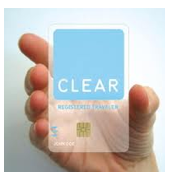 I’m a big fan of the CLEAR card and the CLEAR service. When it first launched, I got it immediately and used it wherever it was available. Fortunately this included Denver, New York, and San Francisco.

If you don’t know of CLEAR, it’s a biometric card that you use in the exclusive CLEARlane at airports to bypass the security line. It’s saved me from missing plenty of flights over the past few years.

In 2009 the company shut down suddenly. The new owners bought it a year ago, honored the old customers, and are gradually rolling it out across the country (currently Denver and Orlando and opening in San Francisco soon.)

I think CLEAR makes a great gift for any frequent traveller out of DIA. In addition, the folks from CLEAR are running is Community Charity program where they give $2,000 to favorite charities in these cities. We get to pick them, so go to the CLEAR Community Charity blog and vote now.