The Incredible Unevenness of Internet Connectivity

I’m at the The Athenaeum at Caltech which is the alumni club / hotel on Caltech’s campus. I’m on Caltech Guest WiFi and am getting speeds of between 2 and 10 Kbps (e.g. miserably slow). My Verizon phone has one bar and is flickering between 3G and LTE, but is mostly 3G.

I have no expectation that I get a certain level of infrastructure and connectivity in my life, so this isn’t a rant about that. In fact, I’m amazed on a regular basis that any of this shit actually works. Rather, I’m intrigued by the disparity between the top and bottom speed of connectivity I experience on a daily basis with my laptop and  my iPhone.

Last week in Kansas City I experience the 1gig internet speed that is provided by Google Fiber. I was in a house next door to mine – my Google Fiber was being installed yesterday. 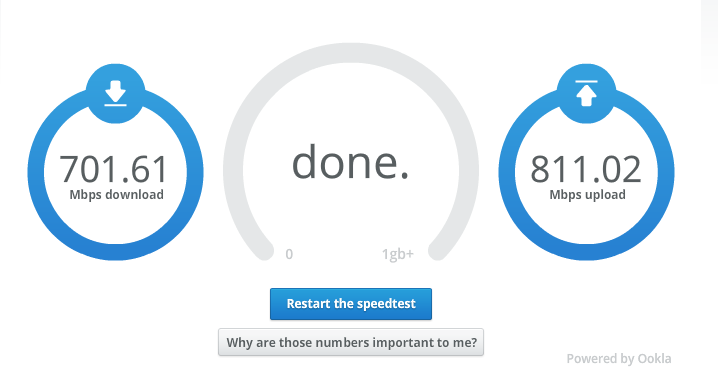 The gap isn’t a little – it’s orders of magnitude. And it’s fascinating to think about the impact of this unevenness. In my house slightly outside of Boulder we have an old T1 line that gets 1Mbps to it via a CenturyLink connection – this is the fastest connectivity I can get where I live. In my condo in Boulder, we are on 50Mbps Comcast connection (although I rarely see more than 20Mbps). I get no cell service at my house outside of Boulder; I get strong cell service and LTE in my condo in town.

I realize that the typical speed I first got when using a computer was 2400 baud (actually – my first modem was 110 baud) – that was only 35 years ago. It’s remarkable the difference between 110 baud and 811.02 Mbps over 35 years, but it’s even more dramatic that within a week I’ve used the same devices and applications at 1Mbps, 20Mbps, 800Mbps, and then get stuck in a place where you are happy when things spike to 20 Kbps.

Richard Florida talks about the power of the world being spiky. It’s interesting to ponder in the context of Internet connectivity.