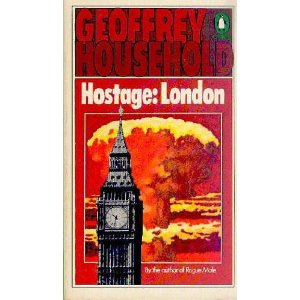 Saturday’s book was Hostage: London by Geoffrey Household. Actually, it was Thursday, Friday, and Saturday’s.

Normally I’d knock off a 240 page Crime Thriller in an evening. But this one was different. It was written in 1978, set in London, and written by a British writer. The writing style was very 1970’s British, the geography was unknown to me, the politics were bizarre and confusing, and the character development took about 80 pages before I actually understood who was doing what to whom. It was also entirely written in diary format which I generally dislike in fiction, although I realize the irony of that since blogs are essentially diaries.

I stopped twice. Once at about 60 pages and one around 120 pages. The first time I stopped I thought about bailing – I have no trouble putting down a book if I’m not interested in it. But in this case I was intrigued at a meta-level – I wanted to understand why this book was so hard for me. Someone I met with on one of my random days recently recommended it and actually gave it to me along with another Geoffrey Household book. I wrote the books down, gave them back, and then bought them on Amazon. So I was determined to figure out why my random day friend liked these books and thought I’d like them.

The second half of the book was great. Once I figured out what was going on, it moved quickly, like a Crime Thriller should. I finished it Saturday afternoon after my run, lying on the couch, with the sound of football and Amy screaming at the television downstairs telling the coaches and the quarterbacks what they should do instead of whatever they were doing.

I’ve got one more Geoffrey Household book in my pile of physical books that I’m reading while I’m here in Keystone for the holidays. Hopefully I get through the next one in a single night and everything will be back to normal in my world.