As many of you know, my partner Jason is from Detroit. The 313. The Motor City. The D! He’s going back home for a special event and I encourage anyone near Detroit to go hang with him.

In case you don’t know about Jason, prior to co-founding Foundry Group, Jason was a co-founder of SRS Acquiom and a Managing Director and General Counsel for Mobius Venture Capital. Prior to this, Jason was an attorney with Cooley. Early in his career, Jason was a software engineer at Accenture.

Going further back, Jason holds a B.A. in Economics and a J.D. from the University of Michigan. He is an adjunct professor at the University of Colorado Law School. He is also an active musician with his band Legitimate Front (which has a gig in Boulder April 13th should you be around). Most importantly, he is my co-author on our book Venture Deals and he puts up with me on a daily basis.

Jason is returning to Detroit to sprinkle some of the wisdom he has learned along the way with the Detroitpreur startup community at Bamboo Detroit on April 5th from 6-8 pm.

Startup Grind Detroit is one of over 350+ chapters around the world, holding Fireside Chats with notable entrepreneurs and bringing startup communities together. The Detroit chapter has recently been reignited by Ben Seidman and Dwain Watkins, the co-organizers, who breathed new life into the program. Recent speakers include Dug Song of Duo Security, David Tarver of Wayne State University, Stacy Brown-Philpot of TaskRabbit and more!

Thanks to Jason’s generous sponsorship of this event, attendance is free to all. But space is limited so register your spot today. If you live in Detroit or know someone who lives in the #2 place to visit in the world (according to Lonely Planet and Jason), please sign up or share this free registration link.

In an effort to buy real estate in burgeoning startup communities around the United States while more deeply engaging in the startup community, my partners and I have bought a house in the Cass Corridor neighborhood in Detroit. Jason Mendelson grew up in Detroit so this is a nice homecoming for him.

If you’ve followed my efforts with my Kansas City Fiber House, you’ll know where we are going with this. This time the four of us bought the house together (personally, not with our fund) and are providing it to Techstars teams in the Techstars Mobility program which is based in Detroit.

The house is a four bedroom Victoria house built in the 1920s on a cute cobblestone street near midtown. It’s around the corner from the Shinola store and several new brew pubs. It’s within walking distance of a Whole Foods.

We are converting the basement into a big work space so it’s a comfortable live/work house. Turnstone is once again helping out with the furniture. Jason is threatening to create a basement bedroom for us (Foundry partners) to stay at when we come to Detroit. Since I stay in my guest bedroom at the Kansas City house when I’m there, I’m a fan of this.

Ted Serbinski and the team at Techstars in Detroit has been amazingly helpful on all fronts with this, just like Lesa Mitchell, Ben Barreth, and the KCSV folks have been in Kansas City.

Now that we have two houses, I wonder where the third one will be.

I’m fascinated with Detroit. When I was there in October 2012 with my partners Ryan and Jason to run the Detroit Marathon we talked about the idea of getting more involved there in some way. Jason grew up in Detroit and has lots of stories there. He goes back regularly to visit his parents and Ann Arbor where he went to school.

Since we were there, I’ve read a few books on Detroit and many articles that popped up about it’s downfall along with some of the entrepreneurial activities trying to revive the city. My partners and I believe that Detroit hit rock bottom around 2012 and in a decade has the potential to be an amazing city once again.

So, Jason and I started talking more about things we could do to positively impact the Detroit startup community and looped the Techstars gang into the conversation.

David Cohen, David Brown, and the team at Techstars grabbed it and ran with it. Last week Techstars announced the new Techstars Mobility program, Driven by Detroit. The local Detroit startup community engaged very powerfully in the idea. From the post about it:

“Throughout the development of the Techstars Mobility program, Techstars worked with Detroit based venture capital firms Fontinalis Partners, Detroit Venture Partners and Renaissance Venture Capital to recruit mentors and ensure capital was ready to deploy in the region. Many other venture firms have also contacted Techstars communicating their interest in bringing capital to Detroit.

Techstars will be bringing their proven accelerator model and extensive network of mentors, founders and corporations to Detroit to support this program. Techstars will also coordinate efforts across the Detroit entrepreneurial ecosystem as a member of the Detroit Technology Exchange (DTX), ensuring that Techstars can have a positive impact across the entire community. Techstars Mobility, driven by Detroit will run for three years with a new class of 10 startups each year.

Several years ago I met Ted Serbinski. Three years ago he moved from San Francisco to Detroit to help rebuild the city. In his words:

“Ten years from now, San Francisco will be just as good as it is today. But in ten years, Detroit will be a roaring city once again, defining a new technology hub at the intersection of muscle and brains. Where do you want to be in ten years? Status quo? Or one of the heroes that rebuilt a city?”

I think Ted is awesome and it’s super exciting to have him join Techstars as the Managing Director of Techstars Mobility. He’s written a great story about how it came together and why it is so powerful at Joining Techstars in Detroit.

My partners and I at Foundry Group – especially Jason – will be playing a role in this new program. Also, expect something really fun from us in the next six months. Hint – it’s something we’ve done before that I’m not sure any other VC firm has ever done – at least not that I’m aware of. 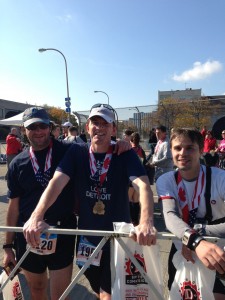 Marathon #23 is complete. On Sunday, I finished the Detroit Marathon in 4:41:39. The two smiling faces next to me in the picture are Matt Shobe, who I’ve now done three marathons with, and my running coach Gary Ditsch. They ran with me in Detroit and it was super helpful to have them.

The most exciting thing for me about the Detroit Marathon was that my partner Jason Mendelson completed his first marathon! The whole notion of this is pretty awesome as Jason had major hip surgery eighteen months ago. It was brave of him to take on the training for this and powerful that he got it done.

We had a big party – Becky Cooper, Ryan McIntyre, and Jill Spruiel from Foundry Group also ran Detroit, as did Andrew Tschesnok of Organic Motion, my long time friend Warren Katz (this is his second marathon), and a few other friends.

The day was perfect for a marathon – sunny and cool. I had very low expectations for myself – my goal was simply to finish. I haven’t run much at all since my bike accident in Slovenia in early September and my ribs and left elbow still hurt a little. While I’d done a couple of 10 mile runs, I think I’d run a total of five times since I got back. So my goal was to rely on muscle memory and just get through 26.2 miles.

Matt, Gary, and I went out slow – doing a 2:26 pace for the first half. We were probably on a 2:30 pace through 10 but then picked it up a little after we got through the mile long tunnel that connects Canada and the US. One of the interesting features of the marathon is that miles 4 through 7 are in Windsor Canada – you head from Detroit to Canada over the Ambassador Bridge and then come back to Detroit via the tunnel between the two cities. As a bonus, I learned that South Detroit is actually Windsor, although my guess is that the people of Windsor refer to Detroit as North Windsor.

I turned my left ankle heading into the tunnel and was nervous for about a half a mile but it was fine. I was also claustrophobic in the tunnel – I really hate running in enclosed spaces for any length of time. But we started to cruise once we got back on America soil.

I did the second half in 2:15:13 – another solid negative split.We had been using an 8:2 run:walk pattern up to about 20 and then shifted to 9:1 for the balance. There was a point were I thought we had 4:39 in our sites but we just couldn’t quite make up enough time. But given that my goal was to finish, it was very satisfying to turn in another sub 4:45 marathon.

I had a blast in Detroit from Friday until I left on Tuesday. I spent all day Monday with entrepreneurs and the activity in the core of Detroit around the emerging Detroit Startup Community is really exciting. Look for a longer post on Startup Revolution from me in the next few days about my thoughts on what’s going on there.

If you see Jason this week, give him a high five for his amazing achievement.