My new book with Ian Hathaway, The Startup Community Way, is officially out. When I saw the Kindle download first thing this morning, I felt a moment of unbridled joy.

Writing a book is extremely hard. I’ve now written seven of them, all about startups and entrepreneurship. My next one, which I’ve been working on for a year with Dave Jilk (my first business partner), combined entrepreneurship and philosophy. Well, Dave’s been working on it a lot more than I have – I’ve been the slacker in this particular effort. But now that The Startup Community Way is out, and the 2nd Edition of Startup Communities is also out, I’m hopeful that my writing energy will shift to the book I’m working on with Dave.

Some of the inspiration for The Startup Community Way came from Eric Ries. I met Eric in 2007 or so and he’s another example, like Tim Ferriss, of a “good friend and colleague” from a distance. We’ve only physically been in the same space a few times, but I’ve learned an enormous amount from Eric, feel emotionally close to him, and have a deep respect for the work he does.

When Ian and I were struggling with the title for this book, batting around silly things like The Next Generation, my eyes landed on Eric’s book The Startup Way on one of my infinite piles of books. This was his sequel to The Lean Startup, which created the phrase “lean startup” and the lean startup movement.

This was analogous to what happened with Startup Communities. Prior to the first edition, released in 2012, the phrase “startup communities” didn’t exist. The book kicked off a new concept, which is now pervasive throughout the world.

I asked Ian what he thought of The Startup Community Way as a title, partly as an homage to Eric. Ian’s first response was “I like it, but will Eric go for it.” I sent Eric a note and he quickly responded that not only was he supportive of it, he loved it.

At the beginning of 2020, I sent Eric a copy of the draft and asked him if he’d write the Foreword. Again, he quickly responded that he would and cranked out a draft of a foreword that, other than a little editing, we included. He did an outstanding job of connecting the lean startup and startup communities to complex systems. And, he was incredibly generous with his thoughts out linkages and impact between our work.

With Eric’s permission, the Foreword it’s blogged below. I hope you like it and that it inspires you to buy and read both The Startup Community Way and The Startup Way.

In 2020, startup communities, which once appeared on the landscape of business (as well as the literal landscape) like so many rare animals, are long past the point of being uncommon or even unusual. As you’ll read in the many compelling stories of progress that follow, they’re coming together everywhere now, both in this country and around the globe, filled with energy and potential and the desire to look ahead to the kind of future we all want for our society. This is a critically important development. Quite simply: We need entrepreneurs and their ideas to keep our society moving forward, not just economically but equitably. The nurturing of startups, which is amplified by magnitudes when they share in a community of organizations and people, is the best way to make sure we achieve that goal.

That startup communities exist in such abundance is thanks, in large part, to Brad Feld. Every startup is unique, unpredictable, and unstable, but that doesn’t mean they can’t be managed for success, provided it’s the right kind of management. The same is true of every startup community. That’s the subject of Brad’s book, Startup Communities: Building an Entrepreneurial Ecosystem in Your City. It lays out clear practices and principles for managing the bottom-up (versus top-down) structure of startup communities, which, because they’re built on networks of trust rather than layers of control, can’t be maintained in the same way that public goods and economic development were in the past. Rather than a rigid, hierarchical set of rules and processes, they thrive on a responsive, flexible method of working that uses validated learning to make decisions with minimal error. Like entrepreneurs, startup community builders can’t rely on hunches or assumptions; they need to get out there, gather data, and see what’s happening for themselves. Only then can they bring together diverse, engaged organizations that draw on each other’s energy and experience and are led by committed, long-term–oriented entrepreneurs. By detailing a system that was hiding in plain sight, like so many methods used by entrepreneurs, Brad made it available to anyone worldwide who wants to bring innovation and growth to their city or town.

All of which is why, now that we’ve reached the next phase of startup community development, there’s no one better than Brad to address its central issue: what happens (or doesn’t) when startup communities co-exist with other, more traditionally hierarchical institutions that, as much as they’d like to work with their innovative neighbors, can’t break free of their old rules and management styles? And how can we ensure that all of these players work together with respect for each other’s strengths, and with clarity, to maximize their positive effect on the world around us? Brad’s answer, once again, is to clearly lay out the methods and tools that can affect this change. He and his co-author, Ian Hathaway, have combined deep experience with rigorous, intensive research and analysis to create a framework for this necessary path forward.

Every entrepreneur continues to iterate on their original product, and Brad is no exception. This book, The Startup Community Way: Evolving an Entrepreneurial Ecosystem, isn’t just a follow up to Startup Communities; it’s a refinement of those initial ideas—as well as an expansion of them. It encompasses the increasingly common and often complex relationships and interdependencies between startup communities and legacy institutions including universities and government (both local and federal) and corporations, culture, media, place, and finance. By situating startup communities within this larger system of networks, Brad and Ian shine light not only on the interconnectedness between them, but their connections to the larger community and society as a whole. The Startup Community Way zooms out to look at the big picture even as it provides a close, highly detailed look at each of the actors, factors, and conditions that can combine to create a successful entrepreneurial ecosystem. It also examines some of the mistakes that are routinely made, like trying to apply linear thinking to the distinctly dynamic, networked relationships in startup communities, and trying to control them rather than let them operate freely within thoughtful parameters. All of this is presented with the sole goal of helping to forge deeper connections between often disparate parts so that they can better work together toward a common purpose.

I feel a deep kinship with Brad, whose work echoes in many ways the development of my own thinking about entrepreneurship and its uses. I began with the methodology for building successful individual startups in The Lean Startup and moved on in The Startup Way to applying those same lessons at scale to bring entrepreneurial management to large organizations, corporations, government, and nonprofits. I share Brad’s faith that the entrepreneurial mindset is crucial not just for improving our present day-to-day lives but also for ushering our world into the future as we apply it to all kinds of organizations, systems, and goals, including those involving policy.

One revision Brad has made since the publication of Startup Communities resonates with me in particular: Where he previously called for startup communities to operate on a simple 20-year timeline, he’s changed that to a “20 years from today” timeline. The work of innovation is continuous, and thinking truly long-term is crucial in order to reap its true benefits. What I mean by long-term thinking is an ongoing, honest, and comprehensive consideration of what we want our companies to look like—and our country and our world—for upcoming generations. In order to have the future we strive for, one in which opportunity and assets are fairly distributed, thoughtful management and care for the planet and all of the people who live on it with us is central, and we need to look beyond the right now to the realization of all the promise of the work that’s already been done. This book is a perfect entry point for doing just that. 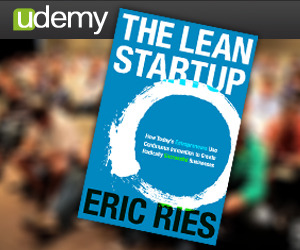 These three courses contain over 9 hours of content and 60 talks from people like Eric Ries, Dave McClure, Steve Blank, Hiten Shah and many more. That’s a lot of knowledge for 67% off.

In addition to the courses, you get a hardcover copy of Eric Ries’ awesome new book The Lean Startup. Eric – congrats on converting all of that digital content to ink on dead trees!

Sometimes I feel like a conference promoter.  It’s worth noting that while I put plenty of events up on this blog, I only post the ones that I’d consider going to.  Specifically, I probably get 10 requests to post something for everyone one I do.

Over the past year, I’ve gotten to know Eric Ries through the work we’ve done together on the Startup Visa initiative.  If you don’t know of Eric, he’s a software entrepreneur who over the past few years has been developing and evangelizing the idea of the Lean Startup.  He’s an extraordinary writer – I gobble up every word that he writes on his blog Lessons Learned.

Eric wrote me the other day about a new conference he’s doing called Startup Lessons Learned in San Francisco on 4/23/10.  The overview of the event follows:

Startup Lessons Learned is the first event designed to unite those interested in what it takes to succeed in building a lean startup. The goal for this event is to give practitioners and students of the lean startup methodology the opportunity to hear insights from leaders in embracing and deploying the core principles of the lean startup methodology. The day-long event will feature a mix of panels and talks focused on the key challenges and issues that technical and market-facing people at startups need to understand in order to succeed in building successful lean startups. We have a great lineup of speakers, including Kent Beck, Steve Blank, Sean Ellis, Andrew Chen, Randy Komisar, Hiten Shah, and many others.

While I can’t be there I highly recommend anything that Eric is involved in.  He’s given me a discount code of ERIES25 which is good for 25% any ticket if you register for the event.  If you are in the bay area on 4/23/10 I encourage you to check it out.