The Upcoming Weekend With My Dad In Chicago

Every year, my dad and I go on a father son trip somewhere for the weekend. We go wherever he wants to go. This year we are going to Chicago – I’m heading out in about an hour. In the past, we’ve gone to Las Vegas, Los Angeles, San Francisco, San Diego, Austin, Miami Beach, Las Vegas again, and a few other places.

I think Chicago will be perfect for us. Our goal is just to hang out. This afternoon we are doing the Chicago Architecture Foundation River Cruise, having a drink with my long time friend Jeff Hyman (my very first VC investment was in his company Career Central, which ended up changing it’s name to Cruel World, which was fitting for its ultimate demise), and then dinner at Swift & Sons.

Tomorrow morning I’m going for a long run, we are going to the Cubs game, getting a tour of Wrigley Field, and then having dinner at Coco Pazzo with Troy Henikoff (who runs Techstars Chicago) and his wife Kristin. We are heading home Sunday morning. 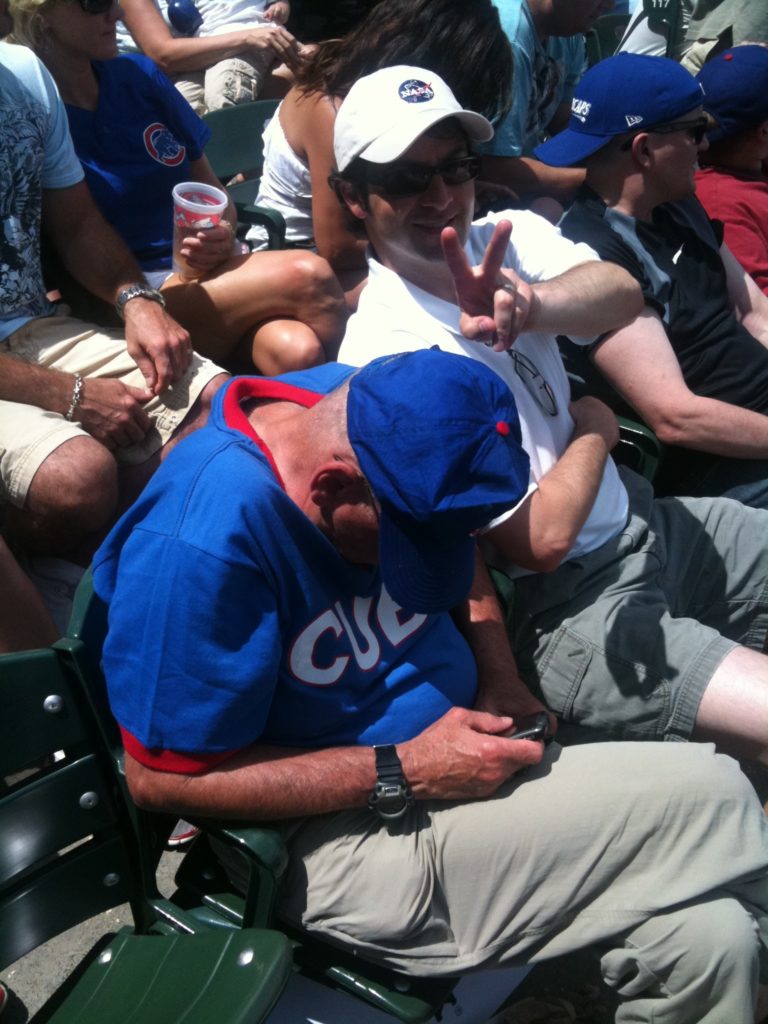 There will be a lot of chocolate ice cream. It’s our favorite food and we will have it at least twice each day. 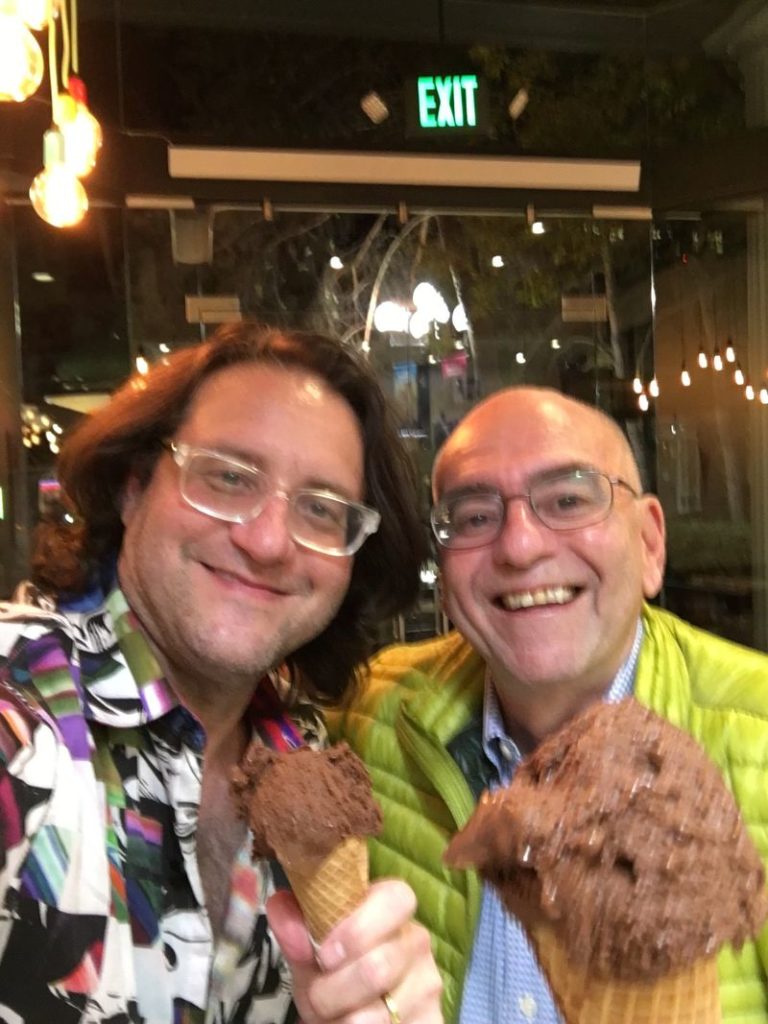 Maybe we’ll have it three times on Saturday if they sell it at Wrigley Field.

My only regret about my father son trip with my dad is that we’ve only been doing it for a decade. I wish we had started 40 years ago. If you are a father and your son is at least ten years old, I strongly encourage you to consider this tradition. If you are a son and you are at least 20 years old, I encourage you to take the initiative and just start doing this with your dad. 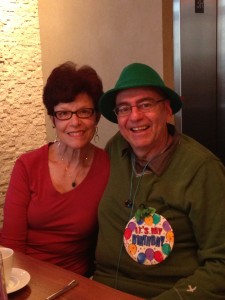 My dad is one of my best friends. I’ve known him for 47 years and other than a few relatively brief moments where we have struggled with classical father / son stuff as I was growing up and separating my identity, he’s always been a buddy, mentor, friend, cheerleader, and confidant. I’ve learned an enormous amount from him, and continue to treasure every moment I have with him.

My mom arranged a 75th birthday this weekend for my dad in San Antonio. They live in Dallas so I’m a little perplexed why we ended up in San Antonio, but when you are 75 you get to decide where you want to celebrate your birthday. So me, Amy, my brother Daniel, his wife Laura, their daughter Sabrina, and my dad’s brother Charlie and his wife Cindy descended on the Eilan Hotel. As expected, there was no shortage of confusion when there were Felds in four different rooms, but we had our usual fun tormenting the hotel staff who tried their hardest to keep us all straight.

As part of the birthday, my mom asked us all to write some thoughts to my dad about our relationship with him. She has compiled them and has them waiting for him when they arrive back in Dallas, but I thought I’d spring my thoughts on him a little early. Here they are!

Dad – as I sit here at 6:46am on 3/11/13 pondering all the amazing things we’ve done together, I closed my eyes and thought back as far as I could to some memories from my childhood. As I get older, I find that the memories fade to snippets, rather than entire concepts, but here are a few that I remember when I close my eyes and let my thoughts drift back to when I was a kid.

– Reading a little green book on endocrinology in my bedroom.

– Being in your very white and organized office at Endocrine Associates looking at all the New England Journal of Medicine books on the wall.

– Driving past the KERA building downtown in the car on the way to something with you and mom.

– Running the 1.5m loop around our neighborhood early in the morning with you.

– Sitting at the round kitchen table in those painfully uncomfortable white mesh chairs eating dinner and talking about what happened during the day.

– Having you hand me the keys to mom’s Corvette while you said “Enjoy it – be careful – don’t kill yourself.”

– Going to a store in Addison to buy my Apple II computer – I remember it was in the shopping center near where Houstons used to be.

– Driving to Frito-Lay’s data center to play on Charlie’s mainframe.

– Sitting in your study at 7310 being extremely frustrated with Hebrew a few weeks before my Bar Mitzvah.

– Sitting in our living room with all my friends who were seniors figuring out how to redesign our high school schedule, and then creating a movement to change it, so that we weren’t stuck in school all day.

– Doing algebra with you. I loved learning algebra. That was probably my favorite time in school at any point in time.

– Walking around Concord, MA with you and mom in October of my freshman year at MIT and wanting to quit because I was homesick and lonely. You told me to give it a year. I did, and by the time a year was up I was fine.

– Being pissed off at you so much that you said something like “I think it’s time for therapy” at which point I let a few days pass and then decided I wasn’t pissed off any more. This was 7th grade or something around there. I remember walking on the 1.5m loop with you as you tried to get through to me.

– Getting a huge hug from you after missing a the final sudden death playoff kick where we lost. Scott Albers (wow – where did that name come from) missed his kick – he was the star of our team – and I let the last one go by me and I cried.

– Doing rounds with you at Presbyterian and hating the way the hospital smelled. Hating the bright florescent lights. And hating the beeping noises.

– Sitting in the back of Cy Arnold’s convertible on the way to a Dallas Cowboys game.

– Getting picked up from Camp Champions when you had gallstones and just hoping we could get home so you could be ok.

– Saying something totally dumb on the CB Radio on a trip to Big Bend that caused a big backlash. I think my handle was “Teddy Bear.” You calmed me down and were very nice about it. We were with the Segals I think.

– Mrs. Waters Chocolate Cake. That stuff was awesome. I think she put drugs in it.

– Having the flu in my old bedroom and puking for a few days during Chanukah. There was a big Hefty trash bag full of stuff involved somehow.

– Playing tennis with you.

– Riding in your Porsche and thinking I had the coolest dad in the world.