Last week there was a kerfuffle over Standing Cloud’s use of the Papyrus font for their logo. It was kind of cute and endearing and my pals at Standing Cloud reacted with appropriate contrition over offending the font police.

Today I came across a brilliant McSweeney article (thanks to @daveschappell) on Comic Sans titled I’m Comic Sans, Asshole. My wife Amy is sitting next to me as I type this laughing her ass off. As a special bonus, our friend Comic Sans makes fun of Bauhaus and then goes and parties with Papyrus. 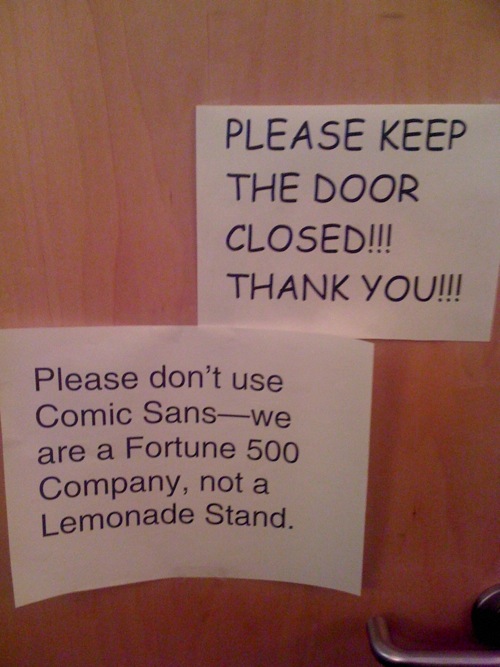 Last Thursday, my good friends at Standing Cloud (we are investors) got a nice (and their first) write up in TechCrunch titled Standing Cloud Gives You One-Click App Installs Across Multiple Hosting Providers. I’m proud of the Standing Cloud team as they’ve resisted all the cloud hype and just stayed heads down and built out some really cool stuff that they are now rolling out.  I tuned into the TechCrunch article and scanned the comments and lo and behold, Standing Cloud seemed to have a giant issue being called out – namely the font of their logo.

Who knew that Papyrus was so hated by TechCrunch readers? Who knew there was a Papyrus Watch website for font offenders? All I could think of was that the Standing Cloud font was better than the old Feld Technologies font, which was in Bauhaus.

Then Dave turned himself into Papyrus Watch and posted a comment about it in the TechCrunch comment stream:

“I failed to heed prior warnings about this issue and we will now have to pay our debt to society. In response to your comment and others, I have voluntarily turned myself in to the authorities at PapyrusWatch (https://www.papyruswatch.com), and we are already making plans to update the logo to something attractive and sensible. I hope you favor rehabilitation over punishment and would be willing to try the service, or at least read the article, despite our aesthetic transgression.”

Papyrus Watch did their part with a post titled The Story of Standing Cloud.  In it, Standing Cloud announced that they have put up the job of designing a new logo for Standing Cloud on 99designs for $395.  Please, no Bauhaus.