We Were Right – Just a Decade Early

This is a line my friend Jerry Colonna uses when something like the AT&T – Time Warner deal occurs. As time passes, the line has shifted to “We were right – just fifteen years early.”

Jerry was Fred Wilson‘s partner at Flatiron Partners. We were all investing in Internet-related stuff at the end of the 1990s. Jerry and Fred had one of the most successful VC funds during this time period until the Internet bubble burst and blew us all up for a while. We made plenty of investments together and I sat on a number of boards with Jerry – we had some big winners and a handful of craters in the ground.

At the peak, AOL bought Time Warner for $162 billion. We only know that was the peak in hindsight – at the time it looked like it validated a lot of what we were doing by investing in the Internet.

The market responded according to plan.

Ponder Gartner’s Hype Cycle for a moment. You can apply this to pretty much anything in tech. 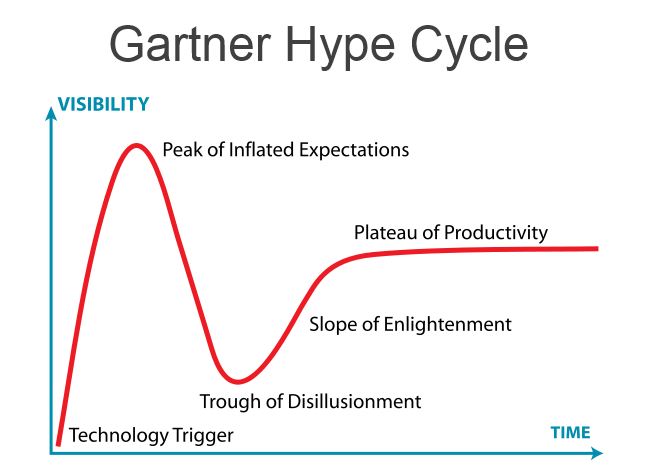 2000 was the Peak of Inflated Expectations. 2002 was the Trough of Disillusionment.

Now, choose any new and exciting technology now. Apply Gartner’s Hype Cycle to it. Ponder where you end up.

Steve Case wrote a book earlier this year called The Third Wave: An Entrepreneur’s Vision of the Future. In addition to looking forward to the future, Steve uses his lessons from the past to explore how things play out. It spans the time frame from 1985 – 2015 which you can just lay down on the Gartner Hype Cycle.

In the context of this, the AT&T – Time Warner deal seems extremely well timed and relevant. Now it’s all about execution.

Consider any of Apple / Google / GM / Ford buying Tesla. Where does that fall on Gartner’s Curve? How about the auto industry. Or drones. Or what people are currently calling AI. Or – well – keep going.

One of the biggest challenges in tech is not being right. It’s being ten or fifteen years too early.