Get Out There And Tell The World What You Are Doing

A few weeks ago I had my weekly mentor meeting with Ian and Adam from Gearbox.  We messed around with the latest version of “the ball” on an Android phone and then talked about a bunch of things that were going on.  I am totally amazed at the technical progress they are making this summer – these guys are magicians.  But they’ve been shy about getting out there and showing off what they’ve been up to.  My sense after talking to them is that their hesitancy was a combination of prioritization, focus, and “the need to get everything right.”

I can’t remember exactly what I said, but it was something like “this stuff is so fucking cool – just start blogging about what you are doing, get the API out there, and get out in front of the world with this.”  Two days later they sent me a note that their first blog post Gear What? was up and they’ve been blogging and talking up a storm ever since, including emerging on the bunker to play on the Pearl Street Mall and flying to Aspen in Paul Berberian‘s plane to spend the day at Mini Maker Faire Aspen.

Now they are having a Hackathon on the weekend of July 24th/25th.  An early version of their API is out and I’ve seen some cool shit running on an Android phone so I know it’s hackable.  If you are an Android developer, this is going to be fun, plus there’s the staple of every hackathon (free food, beer, and red bull.)  If you want to play, send an email to ian [at] gearbox [dot] me.

Oh – and if you are into robots, go check out the 2010 Denver Robot Expo & Mini Maker Faire.  Yup – the Gearbox guys will be there.

Gearbox, one of the teams that I’m mentoring in this year’s TechStars Boulder program, is starting to blog about their product.  One of their taglines is “reinventing the ball” and while this potentially generates plenty of 14 year old boy jokes it’s pretty amazing stuff.

The ball, which consists of a custom circuit board inside a 3D printed spherical shell (which is pretty cool all by itself) with lots of fun things on it, is completely controlled by a smartphone (in this case, an Android). 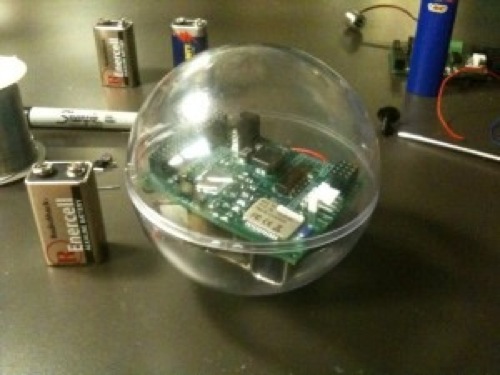 The software is still evolving rapidly but if you know anything about trying to control a spherical shell remotely, watching this video will make you pretty excited.

They are planning to release at least one Android based game by demo day along with an open API to let anyone write applications that incorporate the ball.  I’m totally psyched to get my hands on one of these.