Where Does Foundry Group Invest?

Semil Shah recently wrote a post titled Investing Outside The Bay Area. In it, he talked about his own experience expanding his investment horizons beyond the bay area, but also mentioned some other folks, including us and USV, where he did a quick analysis of the location of our partner funds.

“Another firm linked closely to USV — Foundry Group in Boulder — has also been investing with an eye for geographic diversity. While I don’t have portfolio level stats for them, their new endeavor Foundry Next (to invest in smaller funds and then follow-on into key investments) has built up an LP basket of 23 positions in a variety of new VC funds. Of the 23 funds listed here, 13 are in the Bay Area, 3 in NYC, 3 in Boston, 2 in LA, and one each in Detroit, Seattle, Toronto, Waterloo, Indianapolis, and Fargo, North Dakota. This is a very clever way of helping new funds get their footing and hearing about what is working before others may pick up the scent.”

That generated a fun email exchange between us and prompted me to do an analysis on the locations of the direct investments that we’ve made since we started Foundry Group in 2007. The geographic breakdown of our 123 direct investments follows: 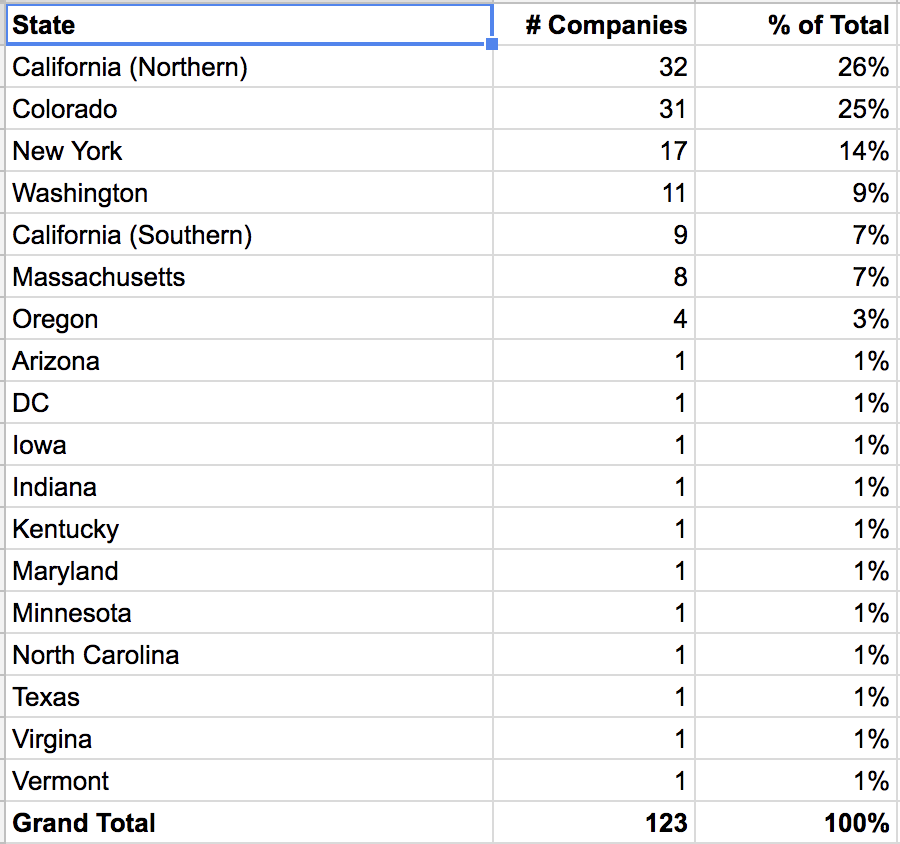 Twelve years later, we were pretty close. When we started Foundry Group, we said that 33% of our investments would be in California (which, at the time, we thought of as equivalent to the Bay Area), 33% would be in Colorado, and 34% would be in the rest of the United States.

We have always believed that great companies can be created anywhere. While we don’t have a geographic allocation approach, we were willing to travel and invest everywhere in the US. We knew that some places, like NYC, Boston, and Seattle, where we already had deep networks, would be common places for us to invest. We’ve been pleasantly surprised with the expansion of our networks in other geographies, like Southern California (LA, San Diego, and Santa Barbara) and Portland.

It’s useful to note that in addition to our direct investing and partner fund investing, we are investors in Techstars, which has redefined seed stage investing all over the world. Currently, they are running accelerator programs in over 16 cities and 13 countries, in addition to Startup Weekend and Startup Week activity, which thoroughly covers the world.

As we start investing Foundry Group Next 2018, I expect we’ll add a few more states on both the direct and partner fund investing side. Hopefully, we will continue to help develop and expand existing and new startup communities.

I’m in San Francisco right now and then New York later this week. When I look at my schedule, and where I’m hanging out, I realize that even though I’m in two very big cities, I’m going to spending most of my time in a very small area.

My guess is that Boulder’s entrepreneurial density is one of the highest in the United States. I don’t have any empirical data to back this up – it’s a qualitative assessment based on my experience traveling around and investing in different parts of the US.

While population is one measure, I’ve also started thinking about geography as another. In the case of Boulder, the core of the entrepreneurial community is in downtown, which is a 10 x 4 block area. Even though downtown Boulder is small, it has different personalities (yes – we have an east side and a west side), yet you can walk from one end to the other in ten minutes. And, inevitably, when I walk across town I always bump into people I know.

The geography index matters even in places like New York. When I stay in New York, I generally stay within walking distance of Union Square. Sure, I end up in midtown or downtown occasionally, but most of my time is spent in a 20 x 8 block area. The bay area splits similarly – I’m in San Francisco within walking distance or a short drive of many of our bay area companies, but I’m on the other end of the planet from Palo Alto.

I’m curious about experiences in other parts of the country, especially entrepreneurial communities that are growing or trying to reinvigorate themselves. How does entrepreneurial density (either geo or population) impact you?