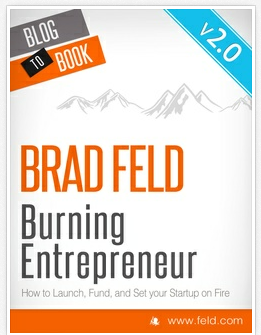 One of the super cool things about self publishing is that it’s really easy to make updates and release a new version. I released – with HyperInk’s help – the first version of Burning Entrepreneur on April 11th.

Last week we released v2.0. We’ve fixed typos, clarified a few things, added tweets and comments to the body text, and added a few more chapters. We also updated the title to simply “Burning Entrepreneur” although the subtitle “How to Luanch, Fund, and Set Your Startup on Fire” is still around.

I’ve gotten plenty of positive feedback on this book and I’m excited about the updated version. If you haven’t read it yet, go grab a copy and tell me what you think. And – if you’ve read it – toss up a review on Amazon if you feel like it as every one of them helps.

New Book: Brad Feld’s Burning Entrepreneur – How to Launch, Fund, and Set Your Start-Up On Fire! 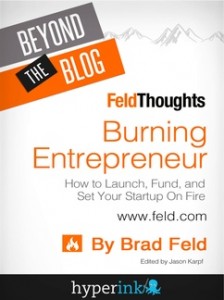 Inspired by my friend @FAKEGRIMLOCK, I’ve launched a new self-published book with the gang at Hyperink. It’s titled Beyond The Blog: Brad Feld’s Burning Entrepreneur – How to Launch, Fund, and Set Your Start-Up On Fire! and available digitally on Amazon, Barnes & Noble, and Hyperink.

For the next 48 hours, you can buy it for $2.99 from Hyperink. After that it’ll go to it’s normal price of $4.95. But, in either case you’ll get six copies for the price of one as with each purchase you get to gift five copies to any friend you want. If you are interested in my writing, I encourage you to buy a copy, give five copies to friends, and tell me what you think of it.

This is an experiment in self-publishing. Part of the way I learn is to just try stuff, see how it works, measure the results, get feedback, and iterate. I have a good understanding of how the traditional publishing industry works now that I’ve done two books with Wiley (Do More Faster and Venture Deals) and I thought working with Hyperink would be a great way to learn more about self-publishing. They approached me, told me they wanted to do an ebook based on a bunch of blog posts I’d written, and asked if I was interested. They reminded me recently that my reply was “Totally game to play – tell me what I need to do.” They hired an editor Jason Karpf who did an excellent job of curating a bunch of posts, organizing them into a coherent book, editing them so they all worked together, and putting it together in a clean, extremely readable format.

When I got the first draft and read through it, I was really psyched with which posts they had built the book around. While you can obviously find all the original posts on the web, seeing some of the best posts I’ve written about entrepreneurship organized in a cogent fashion was very satisfying. But I’ll leave it up to you to decide if it’s any good or not.

The outline of the book is on the Hyperink site. Grab a copy (or six) and tell me what you think. Feedback welcome!