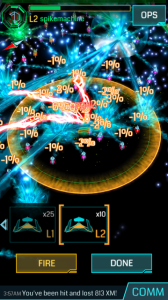 Yesterday at the end of the day I was sitting in Greg Gottesman‘s office at Madrona catching up on email before dinner. Greg walked in with Ben Gilbert from Madrona Labs.

We started talking about sci-fi and Greg said “Are you into Ingress?” I responded “Is that the Google real-world / augmented reality / GPS game?” Greg said yes and I explained that I’d played with it a little when it first came out several years ago since a few friends in Boulder were into it but I lost track of it since there wasn’t an iOS app.

Greg pulled out his iPhone 6+ giant thing and started showing me. Probably not surprising to anyone, I grabbed my phone, downloaded it, created an account using the name the AIs have given me (“spikemachine”), and started doing random things.

Greg went down the hall and grabbed Brendan Ribera, also from Madrona Labs, who is a Level 8 superstar Ingres master-amazing-player. Within a few minutes we were on the Ingress Map looking at stuff that was going on around the world.

By this point my mind was blown and all I wanted to do was get from basic-beginner-newbie-no-clue-Ingre player to Level 2. With Brendan as my guide I quickly started to get the hang of it. A few hacks and XMPs later I was Level 2.

I asked Greg, Ben, and Branden if they had read Daemon by Daniel Suarez. None of them had heard of it so I went on a rant about Rick Klau’s discovery of the book and Leinad Zeraus, the evolution of this crazy thing into Daniel Suarez’s bestseller and the rest of my own wonderful romp through the writings of Daniel Suarez, William Herting, and Ramez Naam. It wasn’t merely my love of near-term sci-fi, but my discovery of what I believe is the core of the next generation of amazing near-term sci-fi writers. And, as a bonus to them having to listen to me, I bought each of them a Kindle version of Daemon.

Ingres completely feels like Daemon to me. There is plenty of chatter on the web about speculation of similarities and inspirations of Daemon on Ingress. I have no idea what the real story is, but since we are all suspending disbelief in both near-term sci-fi as well as Ingress, I’m going with the notion that they are linked even more than us puny humans realize.

This morning as I was walking through Sea-Tac on my way to my plane, I hacked a few portals, got a bunch of new stuff, and XMPed away whenever a resistance portal came into range. I’m still a total newbie, but I’m getting the hang of it. And yes, I’m part of the enlightenment as it offends me to the core of my soul that people would resist the future, although it seems to be more about smurfs vs. frogs.