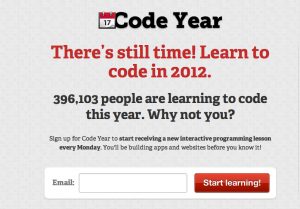 Six weeks ago I saw a tweet about a new thing from Codecademy called Code Year. It promised to teach you how to code in 2012. I signed up right away and am now one of 396,103 people who have signed up as of this moment.

Like a good MIT graduate, I’ve procrastinated. When I was an undergrad, I liked to say things like “I want to give all of my fellow students a four to six week handicap.” Yeah – I was the dude that blew off too many classes at the beginning of the semester. I did read everything so I eventually caught up pretty quickly, but fortunately MIT drop date was late in the semester so I had plenty of option value on bailing if I’d left things too long.

Every week for the past six weeks I’ve been diligently getting an email from Code Year saying my next lesson was ready. Tonight, after dinner, I decided to tackle week 1 and see if this was an effective way to learn JavaScript. While I’m able to program in PHP and Python, I’ve never learned JavaScript. I’m not really proficient in either language (PHP or Python) since I don’t write any production code anymore, but I’m comfortable with the syntax and have done my share of simple little things. JavaScript – not so much. And that seems silly to me since so many people that I hang out with eat JavaScript for breakfast.

Week 1 was trivial. I liked the Code Year lessons and the Codecademy UI is very good. I’ve scored 350 points, have completed 42 (simple) exercises, and have four badges, I only did the lessons for week 1; I’ve left the problems for another time to see if the syntax actually sinks in.

I been spending some time with friends in Boulder talking about different approaches to teaching people how to program. One of the initiatives, which is starting to pick up speed, is called the Boulder Software School. Within the group we’ve been pointing at things like Code Year, but I don’t know if any of us have actually given it a shot. So – in the spirit of experimenting, I’m on it. It’ll be interesting to see if any real proficiency with JavaScript emerges, or if I just learn the syntax for another programming language that puts angle brackets in funny places to delimit conditional statements.